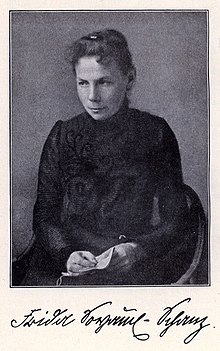 She was the daughter of the poet couple Julius Schanz and Pauline Schanz . After taking the state examination in Dresden, Frida Schanz became a teacher in Bohemia . She traveled to Odessa and Venice , among others . In 1885 she married the writer Ludwig Soyaux (1846–1905) in Leipzig , who was also editor of the magazine Daheim . She was active as a writer since the marriage.

From 1891 she lived in Berlin . In 1895, she and Clementine Helm began to publish the Almanac Young Girls . Since Helm died the following year, Schanz continued the project alone until 1904. Until 1905 she also published the yearbook Kinderlust . After the death of her husband in 1905, she worked in the editorial office of Daheim and as an editor for Velhagen and Klasings monthly magazines . Her work includes children's literature, short stories, fairy tales, short stories, poems and memoirs ( Fridel , 1920).