The barque is a type of sailing ship with at least three masts, which carries square sails on the front masts , but only sling sails on the last mast . The barque was widely used as an ocean freight ship in the second half of the 19th century.

Compared to the full ships rigged with square sails on all masts, the barque has a significantly more favorable ratio between sail area and thus speed on the one hand and the size of the ship's crew necessary for safe operation on the other.

In the three-masted barque, the masts from bow to stern are called : foremast , mainmast and finally mizzenmast . The four-masted barque has the cross mast in third position . There are different systems for the five-masted barque:

In the Potosi , a freight sailing ship of the F. Laeisz shipping company , the name Laeisz mast is also supposedly used for the fourth mast. There are no barges with more than five masts, but there are schooner barges .

Development of the four-masted barque

The first ship with the rig of a four-masted barque was launched on 28 July 1824 at the shipyard of Charles Wood in Anse-du-Fort (Île d'Orléans) in the Canadian province of Quebec from the stack . The 3,690 gross registered tons (GRT) ship, baptized with the name Columbus , was a roughly timbered (log ship = "wooden ship" or "log ship"), not caulked wooden ship, which dismantled on arrival and like the cargo (6,300 tons) as Lumber should be sold. Contrary to original plans, it was ordered back to Canada and was lost.

In the meantime, the Baron of Renfrew was built another, significantly larger model (5,250 GRT) and sent to Europe in 1825. It ran aground in the English Channel and broke. The next example of a four-masted barque was the Great Republic , a clipper barque of 4,555 GRT, which had not been achieved before. 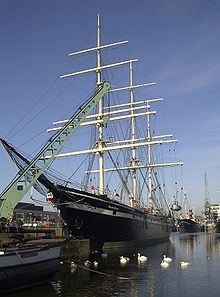 There were only six ships of this type:

Name of the rigging of a barque