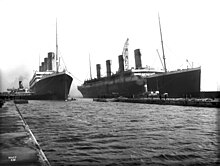 The sister ships Olympic and Titanic

Sister ship is the designation for sea or watercraft of the same type, which were usually built in small series at the same shipyard. The ships following the first in a series show no or only minor changes compared to this ship. At the beginning of the 20th century, the term sister ship was only included in the plural as a keyword in German lexicons , and the sister ships were then explained as “ships with the same construction plan”. Several sister ships belong to one ship class .

The term sister ship has two meanings. Colloquially it refers to the great resemblance of two or more ships , as if they came from one family . In technical terminology, only those ships are referred to as sister ships that actually come from a series based on largely identical construction plans and are therefore identical in their essential characteristics. As far as there are characteristic deviations within a series, one speaks of half sister ships or short half sisters as they are, for example. B. had the imperial dispatch boat Sleipner , which was put into service in 1900 .

Since large proportions of costs arise in shipbuilding both in the construction and planning phase and later at the shipyard , when building ships you can save costs by reusing the construction plans and the experience gained during construction ( synergy effects ). At the same time, standardization simplifies use. Spare parts for repairs also become cheaper as a result of such small series.

The first unit of such a series is called a type ship . The sister ships that emerge afterwards are often very similar at first. Later modernizations, conversions and repairs often lead to characteristic differences appearing after a while, which characterize the individual sister ships (or certain assemblies as so-called sub-classes) (ship genealogy). In this way, entire “ family trees ” of a type development can be shown, especially for large ship classes . Successor classes are often based on similar drafts of their predecessors, so that with only small changes it sometimes remains a matter of dispute whether it is a new subgroup of a class or a new class.

As a rule, sister ships are characterized by at least one identical hull , which structures can vary and lead to different ship types (for example, in the class of Japanese battleships Yamato and Musashi was it by changing the plans for the completion of a half-sister as aircraft carriers , the Shinano ).

Since only practice shows how well a design meets all the requirements placed on it, changes to some construction details can occur after the construction of the type ship, which then differentiate the sister ships from their type ship. Examples are other sailing areas with or without ice reinforcement, open driving bridges for tropical areas, closed ones for cold areas, different machinery, different superstructures or different armament for warships . 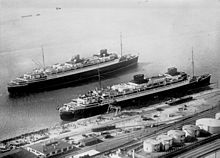 The Europa (at the front of the quay) together with her sister ship, the Bremen (at the back) in Bremerhaven , 1930

Sister ships of civil shipping were, for example, the Olympic (here as a basic design), Titanic and Britannic of the White Star Line , with the Olympic being the type ship and the Titanic being the larger sister ship. Other well-known sister ships from the era of the ocean liner were the Mauretania and the Lusitania of the Cunard Line or the Bremen and the Europa of the North German Lloyd .

In military seafaring, there are regularly so-called classes for units of all sizes, which are usually named after their type ship. One of countless examples is the final battleship class in the American Navy , the Iowa class . The Iowa is the lead ship, her sister ships are New Jersey , Wisconsin and Missouri . They are almost identical; nevertheless there are differences z. B. with bridge , light anti-aircraft armament and electrics.