The RMS Olympic ( English : [ʊˈlɪ̃mpɪk] ) of the shipping company White Star Line was the first and eponymous type ship of the Olympic class and thus sister ship of the Titanic and the Britannic . Mainly because of her military service, she was later nicknamed "Old Reliable" (in German "old reliable").

For the launch, the hull of the Olympic was given a light gray paint job

On June 14, 1911, the Olympic started under the command of Captain Edward John Smith , who later commanded the Titanic , on her maiden voyage from Southampton via Cherbourg and Queenstown to New York . Already in September 1911 she had a serious collision with the British cruiser Hawke , which required an expensive three-month repair. This delayed the completion and maiden voyage of the Titanic by three weeks.

The Olympic was on her way back to Europe when she received the distress call of her sister ship Titanic . Although she drove towards the scene of the accident at top speed, she was out of range due to the distance of around 500 nautical miles (or 20 hours). After the Titanic disaster, she was equipped with additional lifeboats, reinforced bulkheads and a double outer skin.

During the First World War , the Olympic served as a troop transport ship from 1914 to 1918. Two war events worth mentioning date back to October 1914, when she drove undamaged through a minefield to help the sinking battleship Audacious , and on May 12, 1918, when the German submarine U 103 was sighted about 500 meters away . Obviously, the submarine crew had not noticed the steamer in time to get into the optimal attack position and had to fall back on the rear torpedo tubes, which were not ready to fire in time. Captain Hayes let the Olympic take course on U 103 , which tried to save itself with an emergency diving maneuver. But the steamer rammed the boat, its port propeller pierced the pressure hull, whereupon U 103 sank. Ten German submarine drivers were killed, 35 men survived and were later picked up by a US ship.

The Olympic passed the lightship LV-117 near Nantucket, one month before the fatal accident

After serving in the war, the Olympic was converted back into a liner in 1919 . As with many large steamers , their boilers were converted to oil firing, which not only enabled faster bunkering , but also saved a lot of staff. After that a successful time began for the Olympic .

Very popular and fashionable in the 1920s, it had many rich and famous passengers on board, including Charlie Chaplin , Mary Pickford and Douglas Fairbanks, and Prince Edward , then Prince of Wales . One of the things that made her attractive was that she was confusingly similar to the Titanic .

On May 22, 1924, the Olympic collided with the liner Fort St. George near New York . Later she had on 15 May 1934 its only fatal accident than those which in dense fog Nantucket - Lightship rammed. The lightship sank, killing seven of the eleven crew members.

In February 1926, the Olympic in the North Atlantic was hit by a monster wave , which caused numerous damage, including four destroyed bridge windows (usually about 24 meters above sea level).

The ships of the line were also affected by the global economic crisis at the end of the 1920s. In particular, the White Star Line, whose management was more risk-taking and never fully recovered from the Titanic disaster, found itself in financial difficulties. In 1934 the British government forced a merger with the competing Cunard Line . The management of the shipping group then began selling all old express steamers to finance the construction of the Queen Mary and Queen Elizabeth . In view of the economic situation and the age of the ship, politicians brokered the sale of the Olympic to a scrap yard near Jarrow (north-east England) in order to alleviate the high unemployment there. Her official last trip ended on April 12, 1935, coming from New York in Southampton . By then, she had crossed the Atlantic 257 times, carrying 430,000 passengers commercially and covering 1.8 million nautical miles . 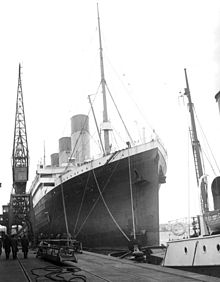 The 1929 Olympic in Southampton 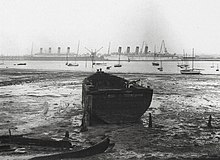 On October 11, 1935, after a two-day drive, she reached Jarrow, where, among other things, the interior was expanded over the next two years. Numerous furnishings were sold at auctions. The hull was towed to Inverkeithing (Scotland) and broken up there .

Many of the furnishings that have been preserved enjoy great public interest to this day due to the cult of the Titanic . For example, large parts of the wood paneling, the furnishings in the first-class salon, handrails and wooden panels on the staircase of the Olympic and a marble fireplace were installed in the White Swan Hotel in Alnwick , UK .

The walnut panels of the wood paneling from the à la carte restaurant were initially installed in a British private house. The American shipping company Celebrity Cruises later acquired the parts at an auction of the Sotheby’s auction house . You are now in the Olympic restaurant on the Celebrity Millennium cruise ship .

The famous Honor and Glory Crowning Time clock from the stairwell, identical to the one from the Titanic, is in the SeaCity Museum in Southampton .

The following dates changed from 1911 to 1933 as a result of renovations: 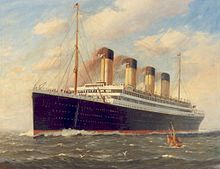 The Olympic around 1913, painting by Fred Pansing