This article covers the crews of vessels. For the crew of air and space ships, see aviation personnel .

Part of a military ship's crew around 1900

Part of a military ship's crew from 1864 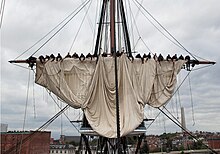 Crew members on a yard of the USS Constitution, built in 1797 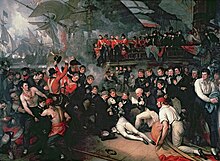 Painting of a military ship's crew from 1805

Painting of Turkish and European ship crews from 1632

A ship's crew (also called manning) is the entirety of all seafarers on a boat or ship . The crew includes the captain , the nautical officers and technical officers as well as - depending on the vehicle - other employees such as decks , machinery and service personnel.

The term is mainly used in commercial shipping , less often in airships and in space travel (see space travelers ).

The scope and qualifications of the crew are based on the regulations for the sailing area and area of ​​operation. Here, some roles are explicitly defined, while other positions are included in the crew, but are not mentioned in the official statements. The German Ship Occupation Ordinance (SchBesV) of 2013 is directed in Section 1 to all German merchant ships that fly the federal flag . There, in addition to the captain and the officers - depending on the size of the ship - ship mechanics and seafarers qualified to watch are mentioned. Special professions such as radio operator , ship's doctor , sailor , machinist , electrician , cooks and stewards can be on board, but are not further regulated there. There are also statutory, country-specific manning requirements for other forms of operation, for example for the navigation of commercially used pleasure craft or the operation of traditional ships . The various manning regulations are often dependent on the length of the ship, the area of ​​travel and daily sailing time. The basic rule is that the crew must be composed in such a way that the ship can always be safely navigated under all conditions .

Over the centuries, various demands were made on the ship's crew. In the galley or sailing age, for example, it was considerably more labor-intensive to operate a ship safely and to initiate all the steps necessary for movement than is required for today's largely automated and mechanized shipping. In addition, the trips lasted considerably longer and could drag on for months or even years, whereas nowadays the same route can be traveled within days or weeks thanks to the wind-independent machine drive.

Against this background, ship crews and ships from that time were also equipped with a different staffing structure, which also had to perform complex tasks in their functions. Compliance with on-board discipline, long-term stocking of the crews, repair and maintenance of the ship with on-board resources during the voyage had a different role than is the case today.

Military ship crews differed in the seamen for the technical service , led by nautical officers , naval artillerymen for the operation of the ship's guns and marines for the close combat ship to ship in earlier times and the military order on board, these were housed separately from the ship's crew.

In order to give an overview of the ship's crews from different epochs and an insight into the individual functions on board, some exemplary ship's crews are listed below.

The functional composition of the crew of a Hamburg sailing warship ("convoyer") from 1690 is as follows:

The functional composition of the crew of a French liner from 1805 has been handed down as follows:

Container ship in the 21st century

Typical composition of the crew of a conventional container ship of the 21st century:

The crew members must have a corresponding certificate of competency or certificates in accordance with the STCW Code . The minimum manning of a ship is specified in a manning certificate.