The Rhine gold ? / i (WWV86 A) is anoperabyRichard Wagnerand, together with the following three musical dramasDie Walküre,SiegfriedandGötterdämmerung, formthe complete work (thetetralogy)The Ring of the Nibelung. TheRing des Nibelungenis a “stage festival for three days and one evening before”. The entire textbook was privatelyprinted in 50 copiesafter readings inZurich in1853. The Rheingoldis the shortest of the four works (approx. 2½ hours) and is performed without a break. The premiere of "Vorabends" took place on September 22nd, 1869 in theRoyal Court and National Theater in Munichunder the direction ofFranz Wüllnerand against Wagner's will. ThefirstBayreuth Festivalopened on August 13, 1876with a performance ofRheingold.

The work has been published by Verlag Schott , Mainz (Richard Wagner Complete Edition). The autograph of the score has been lost since the Second World War .

In the Rheingold the fundamental conflicts of tetralogy, especially the controversy about power and love, are presented.

The work begins with an approximately four-minute prelude (136 bars ) in which themes of the surging Rhine develop from a low E flat major chord. Only then does the actual plot begin, in which the Rhine daughters Floßhilde, Wellgunde and Woglinde appear. These are naive natural beings who have a magical treasure and guard it in the depths of the river - the Rhine gold. However, this treasure loses its innocent character and helps to immeasurable power when its owner renounces love and forges a ring out of gold ( quote: “Only those who renounce love of power, only those who chase away lust, only achieve magic to force gold to hoop ” ).

The dwarf Alberich from the people of the Nibelungs succeeds in doing just that (hence: The Ring of the Nibelung ) after the Rhine daughters have spurned his desire for love, whereupon Alberich finally curses love and in greedy rage steals the gold. He can now use the magic powers of the ring, subjugates the entire Nibelung people and forces them to work for him in the Nibelheim gold mines. He also subjugates his brother, the blacksmith Mime , and forces him to make a camouflage helmet for him, with which he can make himself invisible or assume any shape.

In the meantime, the giant brothers Fasolt and Fafner have completed the Walhall castle of the gods (“ Completes the eternal work ”). In return, Wotan had promised them the goddess Freia , who guards the secret of eternal youth, for marriage. Because only Freia can pick the apples from the garden of youth, which help the gods to immortality; they cannot do without them. Wotan cannot afford to breach a contract without endangering the foundations of his own power. So he first sought advice and help from Loge , who had suggested the contract with the giants to him at the time: he should look for a replacement for Freia. Loge then roamed the world, but found no equivalent substitute for love (and thus for Freia). Only from one person, Alberich, had he heard that he had renounced love for the power of the Rhine gold. Alberich's power is a threat to the giants. You are ready to exchange Freia for the gold that the Nibelung Alberich has now amassed. Until a solution is found, they keep Freia as a deposit.

Together with Loge, Wotan sets out to Nibelheim , deep in the earth, and through cunning they manage to take the Nibelung treasure from Alberich, including the camouflage helmet and ring (the key to power and wealth). Alberich is so angry about his being overwhelmed and robbed that he curses the ring ( quote: "Whoever owns it see worry, and whoever doesn't have it, gnaw envy" ).

Wotan only wants to exchange the hoard (the gold) for Freia and keep the camouflage helmet and the ring for himself. However, the giants insist that the entire Nibelung treasure be handed over. In this situation, the primeval mother Erda appears and warns Wotan of the curse of the ring. She prophesies the twilight of the gods , the end of the gods. After Wotan was the last to hand over the ring to the giants, Alberich's curse shows its effect for the first time: Fafner greedily kills his brother Fasolt while sharing the booty.

At sunset the gods can take possession of Walhall Castle. But the danger of the curse is not over. To counter this danger, Wotan has an idea that is already presented musically in the 4th scene of the Rheingold ( Nothung , the sword ), the implementation of which remains reserved for the other works in the cycle. The Rhine daughters beg the gods to give them back the stolen gold, but they only earn scorn and ridicule.

How much the Rheingold (as the eve of the tetralogy) is interwoven with the following works Die Walküre , Siegfried and Götterdämmerung - referred to by Wagner as the first, second and third day - becomes musically clear through both forward-looking and referring motifs. In the large dialogues between Wotan and Fricka or between Wotan and Briinnhilde in the second winding of the Walkiire , talking between Wotan (Walker) and the blacksmith Mime in the first Siegfried -Elevator and in the Nornen scene of Gotterddmmerung is to the act of Rheingold repeatedly referred to. 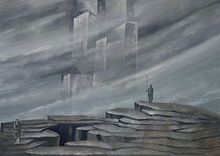 The Rhine gold shines in the first scene after sunrise in the depths of the Rhine and makes the entire reef shine. The beauty of the natural spectacle shows the world in its natural order, to which the Rhine daughters also belong: Unaffected by individual striving for power, they guard the gold, "so that no wrongdoer steals it from the hoard".

Alberich , who appears for the first time in the same scene, has separated himself from this natural order. His actions arise on the one hand from envy, wanting to own, the "envy game" in which the stronger defeats the weaker and keeps his belongings as booty, but on the other hand it is also triggered by the behavior of the Rhine daughters, who seductively incite his lust to mock him afterwards: Alberich tries to win over one of the beautiful Rhine daughters, but is only teased and rejected by them. The Rhine daughters unsuspectingly - and carelessly - tell him about the gold. Alberich, at first impressed by the natural beauty of gold, asks immediately about the mercantile value ("Your diving games were only good for gold? I don't care!") . He learns from the Rhine daughters that only those who cursed love can create a ring out of gold that gives them power over the entire world. Alberich then curses love and snatches the gold (“I don't force love, but I cunningly force myself lust”) . He succeeds in forging the ring, and he first uses it to implement the associated power in coercion against his Nibelung people, who from then on have to win new treasures from the underground shafts and restlessly amass the Nibelung hoard. Alberich's brother Mime also has to forge the camouflage helmet under the pressure of the ring. Only at the end of the entire tetralogy do the Rhine daughters get the ring back so that they can dissolve it back into pure, "pure" gold.

Elfriede Jelinek , the 2004 Nobel Prize laureate in literature , published a prose work in 2013 entitled purely GOLD. A stage essay that deals with the status and effectiveness of gold and money in capitalism . rein GOLD was created at the suggestion of the Bavarian State Opera in Munich and, according to the author, is primarily based on the libretto and the prose draft of Richard Wagner's Der Ring des Nibelungen .

Cast for the first performances in Munich, Bayreuth and Vienna

Duration (using the example of the Bayreuth Festival)

At the Bayreuth Festival it was customary to document the length of the individual lifts, but not all years were recorded there. In view of the uninterrupted performance of the Rheingold, however, the documentation was easier than for the other parts of the Ring des Nibelungen. Therefore, more data is recorded precisely. Even with the same conductor, the duration differed from year to year and performance to performance. The type of voice and the temperament of the singers also influenced the duration.

Commons : The Rheingold  album with pictures, videos and audio files

Richard Wagner's " The Ring of the Nibelung "

The Rheingold  | The Valkyrie  | Siegfried  | Götterdämmerung

The Ring of the Nibelung
Das Rheingold  | The Valkyrie  | Siegfried  | Götterdämmerung