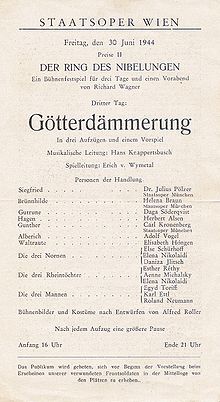 Cast sheet from the program booklet for the last performance of the Vienna State Opera before it was bombed on March 12, 1945

Höngen performed as a violinist at the age of 15. She studied German and musicology in Berlin , later singing. In 1932 she completed her studies at the Academic University of Music (opera school) as a vocal teacher. On Good Friday of the same year she sang (in the old position ) with the baritone Hans Peter Purand (also: Peter Purand; * June 25, 1908, † unknown) in Berlin's Lazarus Church .

She made her debut at the Opera House in Wuppertal in 1933 . From 1940 to 1943 she sang at the Semperoper Dresden , including in Richard Strauss ' Die Frau ohne Schatten and Elektra and as Lady Macbeth in Giuseppe Verdi's Macbeth . She was also active as a song and oratorio singer . With her appearance on July 9, 1943, she said goodbye to Carmen with Dresden and went to Vienna, where she had successfully debuted as a guest on June 24, 1942 under Hans Knappertsbusch (as Ortrud in Lohengrin ), followed on July 4 by the Part of the Brangäne in Tristan and Isolde .

In a black and white studio production sung in German by the ORF in 1959, Elisabeth Höngen played the role of the abbess in the one-act play Suor Angelica from Il triptych (The Triptych) by Giacomo Puccini . Gian Carlo Menotti's Das Medium followed in 1961 . In 1962 she was in the ORF TV production of the Ernst Krenek opera Of all things and gambled away the pawnbroker Geraldine.

From 1957 to 1960 she was a professor at the Vienna Music Academy . The conductor Karl Böhm described her as the "greatest tragedy in the world". 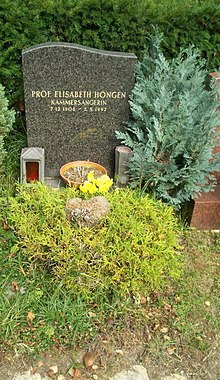