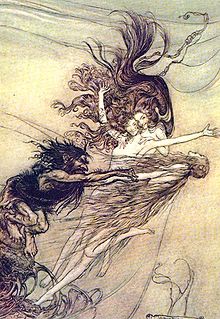 Alberich and the Rhine Daughters ( Arthur Rackham , around 1910)

The Rhine daughters Wellgunde, Woglinde and Floßhilde are among the protagonists of the tetralogy Der Ring des Nibelungen by Richard Wagner .

They are mythical nature beings, like the timeless and knowing Erda and the Norns who watch over fate . With his ring seal, Wagner created his own mythology.

The Rheintöcher appear in Rheingold , the first work of the tetralogy, as guardians of the natural gold lying in the Rhine. The dwarf Alberich , a Nibelung , vies for their favor, but they reject the ugly recruiter. Powerlessly they then have to watch how Alberich steals the gold from the Rhine (for the sake of the stage effect it presents itself as a massive piece of gold), and how he then curses love. Renunciation of love and the Rheingold forged into a ring will give him immense power. This prophecy was made - rashly or deliberately, that remains in the balance - the Rhine daughters.