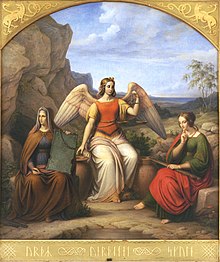 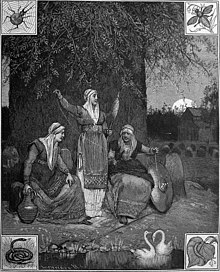 The Norns ( old Norse nornir ) are fate-determining female beings in Norse mythology , some of whom are said to have descended from gods, others from dwarfs or elves . Within the Indo-European religions and mythologies, there is a relationship with the Roman Parzen and the Greek Moiren .

The Norns in the Edda

Three women of fate are named: They are called Urd (fate), Verdandi (that which is becoming) and Skuld (guilt; that which should be). Their names are considered to be the Nordic counterparts of common medieval conceptual concepts of the time in the form of personifications of the past (Urd), present (Verdandi) and future (Skuld). Even if their names are young, they seem to go back to an old Germanic idea of ​​a nameless trinity of women of destiny.

After Völuspá they live at the root of the world ash Yggdrasil at the Urd-spring , the source of fate, after the Norne, Urd is named. They direct the fate of men and gods.

According to the Gylfaginning in the Snorra-Edda , the tree is not preserved by fog, but the Norns tend it:

“It is also said that the Norns who live at the Urda Fountain draw water from the fountain every day and pour the mud around the spring over the ash so that its branches do not wither or rot. This water is so sacred that all things that get into that spring become as white as the skin that is called Skjall and that sits on the inside of the eggshell. "

In addition, such Norns are mentioned who help mothers with childbirth: In Fafnismál Sigurd asks the dragon Fafnir:

Subsequently, they were given the task of announcing the child's life span. Here they generate the personal fate (Latin: fate) of the individual. In the Edda it says:

"Skuld" (literally: guilt, "Skal": should) is also known as the name of a Valkyrie .

There are similar women of fate in Greek ( Moiren ), Roman ( Parzen ) and Slavic mythology ( Zorya ).

Another variant is that the Norns do not determine fate as such, but that good Norns allocate good and bad Norns assign evil.

“Good Norns of a noble sex bring a good life; but those who suffer misfortune owe it to the wicked Norns. "

Two swans swim in the Urdquelle, all of which are white swans:

"There are two birds called swans living in the Urda Fountain, and it is from them that the species of bird with this name comes from."

Often the Norns are confused with the Valkyries . Sometimes they are also mixed with the guardian spirits Fylgja and the wise women volur and spåkonur . 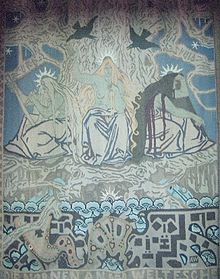 Curtain in the entrance area of ​​the Nibelungenhalle (Königswinter) by August Wilckens : three Norns on the Yggdrasil World Ash spinning the "threads of fate"

Due to the imponderables inherent in fate, the Norns are considered to be the expression of the ambivalent aspect of the so-called mother archetype in the sense of the analytical psychology of Carl Gustav Jung .

In the prelude to Richard Wagner's Götterdämmerung , the last part of his tetralogy The Ring of the Nibelung , the Norns play an essential role. They recall what happened in the three previous evenings, the present and finally, while the rope of fate breaks, from which they read the runes as if in a dream , the near end of the gods, the onset of the twilight of the gods ( Ragnarök ).

Contemporary metal bands, e.g. B. Brothers of Metal , pick up the Norns and other themes of Norse mythology in their pieces.

The Norns also incorporate various fantasy works that take up Nordic mythology into their plot, for example the novel trilogy The Secret of the Great Swords by Tad Williams or the manga series Oh! My Goddess and Detective Loki . But there are also allusions to Nordic mythology in the works Throne of Glass and the Kingdom of the Seven Courts .