from Wikipedia, the free encyclopedia
This is the spotted version , flagged on August 17th, 2020 . There is 1 pending change that has yet to be viewed. 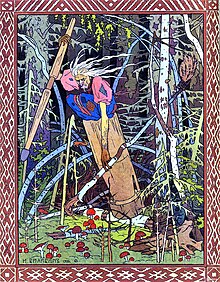 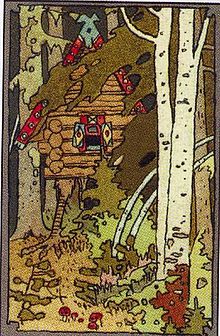 Origin of the designation

The word baba in most Slavic languages ​​means an old woman or simply a grandmother. Jaga is also a Polish abbreviation of the female given name Jadwiga . Roga means something like the horned one . Zima means the cold or cold-hearted .

Names in the individual Slavic languages: 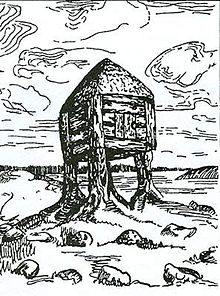 Nicholas Roerich , "Изба смерти" ("Hut of Death", drawing, 1905), an artist's representation of the funeral rites of the early Slavs

When viewed superficially, the Baba Jaga resembles the Western European witch , like the one in Hansel and Gretel . There are numerous speculations about the interpretation of the Baba Yaga, especially from the esoteric side, who want to recognize an Earth Mother goddess in it.

Baba Jaga is also considered to be the third member of a triune goddess, consisting of the virgin , the mother and the old woman . She is responsible for death and rebirth. In some stories she lives with two sisters who have the same name. So together they form the complete goddess: virgin, mother and old woman. If one of the sisters dies by the sword or by fire, the other two sprinkle her with the “water of death”. This will heal her wounds and she will rise from the dead. Baba Jaga is therefore often referred to as the guardian of the waters of life and death.

The modern visual image (after the Christianization of the Slavs) relates more to the European term "witch" (herb woman, healer with magical powers). From this point of view, she also appears in most of the fairy tales recorded by collectors in the 19th century, as a consistently malicious figure.

The nickname Baba Jagas is Kostjanaja Noga (i.e. "bone bone") and its features are a broom and a mortar .

In the fairy tale 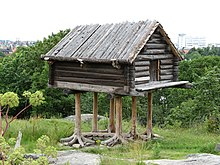 Sami warehouse, Stockholm, Sweden, as a model of the "chicken-legged" hut.

In old fairy tales, the Baba Yaga lives sedentary (for example in a valley or in a section of forest) and cannot leave its accommodation because its magical power is connected to the place. In later pre-Christian fairy tales, she moves very quickly on foot and is only tied to certain natural land borders (rivers, mountains, forests, valleys). In fairy tales after Christianization, the Baba Yaga was given a broom, a black cat and - like witches - is in league with the devil . Christianity began to devalue pagan sagas in the Middle Ages, including the legendary figure Baba Jaga. This is how the powerful, clever old woman becomes an angry, sinister woman who is in league with the devil. Sometimes she is even referred to as the devil's grandmother.

In the varied stories, Baba Jaga appears on the one hand as a skinny and ugly old witch with iron teeth who lives in the forest. She eats people and decorates her garden fence with their skulls. On the other hand, she also appears as a helping figure who gives good advice or gives valuable gifts. She lives in a hut that stands on chicken legs. Sometimes it is even said that she uses it to pursue the dying people and ultimately bring them to her. In Russian folk tales, the house on chicken legs is described as a hut without an entrance. It only turns around on a certain word and then has an entrance door. In other Russian fairy tales, she rides an iron stove that runs on chicken legs. She can also fly in a mortar, which she steers with the mortar pestle , and she covers her footprints with a broom. Often she is considered the mother of Koschtschei the Deadless.

In later Ukrainian , Belarusian and East Polish fairy tales, the Baba Yaga appears as a form-changing, female being who serves the devil as a subject or soul-catcher. The battle takes place between the faithful Christians (mostly male) and the deceitful witch (Vedjma; Wiedźma) who tries to jump onto the protagonist's back in the form of a helpless woman and then rush him to death (literally to ride ) or to dissuade him from his belief with the help of illusions, the central role in the sagas of the Baba Yaga. Also in old Slovenian sagas, e.g. B. from Windisch-Bleiberg in the Karawanken , the barba plays a role as troublemaker and sorceress, but who can also help in otherwise hopeless situations.

In modern fairy tales and stories, Baba Jaga lives as a normal woman (mostly as the mother-in-law, grandmother, mother or the wife of the village elder) among people and only appears to be evil at night or when the moon is full.

The Russian composer Modest Mussorgsky immortalized the flight of the Baba Yaga on the mortar in his famous piano cycle Pictures at an Exhibition . He used pictures by the painter Viktor Hartmann ( 1834 - 1873 ) as a template . British rock band Emerson, Lake and Palmer have reinterpreted Mussorgski's piano cycle and added The Curse of Baba Yaga in their live album Pictures at an Exhibition . Anatoly Lyadow portrayed Baba Yaga in a short but very effective symphonic poem . Alexander Dargomyschski composed a fantasy scherzo "Baba-Jaga" for orchestra. Also in the opera Rusalka by Antonin Dvorak Baba Yaga is (Czech Ježibaba) ago. 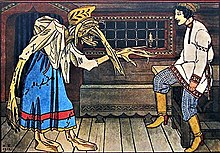 Baba Jaga and her hut belong to the Science Research Institute for Magic and Wizardry in the fantastic novel Monday begins on Saturday by the Strugazki brothers .

The fairy tales about Baba Jaga are mentioned in the Barrayar cycle by the American science fiction author Lois McMaster Bujold as a local color of the planet Barrayar, which is mainly colonized by settlers of Russian origin. In modern children's literature, Baba Jaga appears in the adventures of the strong Wanja by Otfried Preußler and the short stories Taschi by the Australian authors Anna and Barbara Fienberg, in the latter as a man-eating witch. She also plays a leading role in the fantasy story Im Land der Tajumeeren by German author Nina Blazon , but as a cranky, grumpy old woman with a good heart. Also in Kai Meyer's novel The Shadow Eater she appears as a malicious, man-eating witch who manipulates people for her own purposes. In the Hellboy comics by the American illustrator and author Mike Mignola , she is one of the protagonists' opponents. In Neil Gaiman's Sandman comics, she appears in the story The Hunt in the volume Fables & Reflections , where she brings the protagonist to his destination in her mortar.

Baba Jaga is very well known in Europe. The fairy tale was filmed as an adventure in the magic forest , in which the witch plays the antagonist, in 1964. Another adaptation of the fairy tale was written in 2005 for today's boulevard theater in Dresden, in which Rainer König plays the leading role of the witch. There are now four more sequels to the play, a fifth premiered in Dresden in September 2016. In the meantime the "Hexalogy" has been concluded with the "Grand Finale".

The witch Baba Jaga also appears in some Soviet fairy tale films and was mostly cast with the actor Georgi Franzewitsch Milljar . Soviet film adaptations with the main character of Baba Yaga are:

Outside of that, the Baba Yaga appears in the following films: