This article covers the broom cleaning device; For further meanings of terms of the same name, see Broom (disambiguation) .

A broom (from Middle High German bësem , based on West Germanic besman , “Braided; Besen, Rute”) or sweep is an object of daily use , especially for sweeping up dust , dirt and rubbish .

A distinction is made between large brooms and small brooms (hand brooms), those for inside (house brooms) and for outside (street brooms) as well as hand and machine brooms.

A large broom usually consists of a long broomstick , a cross piece of wood, the so-called bar , and the bristles made of animal hair , plant fibers or plastic . The Rod- or broom (regionally also Riedel broom ) is a simpler broom form, possibly earlier by a broom-maker was prepared and was quite common. It does not have a latch, instead a bundle of sticks or straw is attached directly to the wooden handle with string or wire. When using birch twigs , the whisk resembles a large birch rod with a wooden handle.

A special version of the large broom is the screw broom . In this case, the lower end of the broom handle is equipped with a thread that is screwed into the shaft of the broom bar and thus connected to it. The screw broom has the advantage that the bolt can be replaced separately in the event of operational wear and the handle can still be used.

In addition, there are special quick-change systems that allow different cleaning devices to be used on one handle ( scrubber , broom, puller ) or to replace used or damaged attachment parts without tools.

In a small broom (also broom , hand brush , sweeping wiper , push broom or (hand) owl called) a short handle is mounted directly on the bolt in the longitudinal direction or merges into it. A small broom often comes with a dustpan to pick up the garbage.

A push broom is a device used by chimney sweeps to remove soot residue from the chimney . It is made of metal and consists of a flat disc of bristles arranged in a star shape.

Brooms are also used in sweepers . These rotate with manual or motor power under or next to the machine and thus convey the dirt into the storage dirt container.

Tool of a broom and brush maker 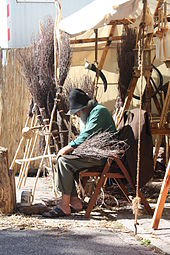 The broomstick is made of wood , metal or plastic. The grip zone can be covered with a special coating made of plastic, coated with paint or provided with an attached metal part.

The bristles are made of vegetable, animal or synthetic fibers, for special areas of application also made of metal ( wire broom ).

From horsehair be i. d. Usually fine hall brooms are made for sweeping on smooth floors, but also so-called house hand brushes, with which, thanks to the fat content in the horsehair, you can work without causing excessive dust. In contrast to plastic brooms, brooms made of wood with natural bristles do not have an electrostatic effect.

Coconut - and Arenga -Borsten arrive at universally usable broom used, which can be used both smooth even on rough floors. Their bristles are stiffer and less sensitive to moisture than horsehair. T. suitable as a street broom.

The most frequently used plants for brooms or sticks are besides the silver birch, depending on the region, broom , heather and red honeysuckle . In Austria, the willow with its dark, thin bark is very well known, it is also known as the brush . The classic brushwood broom is still preferred to the industrially manufactured broom for some applications, such as street cleaning.

For quick manual sweeping of leaves, branches and light waste, especially from unpaved streets and squares, large, airy brooms tied without an extra handle are used in Mexico, which have a 45 ° inclined contour of the ends of the palm leaves .

Goethe's poem The Sorcerer's Apprentice wants to show what can happen when an unqualified person uses magic to swing a broom. The motif of the water-carrying magic broom used by Goethe comes from the work of Philopseudes by Lukian of Samosata .

The ancient Romans ascribed a special meaning to the broom. For example, midwives used a blessed broom to sweep the doorstep of the house where a birth had taken place. In this way, evil influences should be kept away from the newborn and the woman who has recently given birth .

In the time of the witch craze was regarded witches' broom as an aircraft of the witches on which it to Hexensabbat rode. In order for a witch to fly on the broom, she had to rub herself or the broom with a witch or flying ointment beforehand. The belief in witches gave rise to other superstitious ideas . For example, it was considered unfortunate if you had to transport a broom across a river. On the other hand, it was believed that witches cannot cross or jump brooms. A broom across the front door should keep witches and wizards from entering the house.

In more recent times, brooms, so-called gypsy brooms, placed with the handle down next to the front door , were used to keep “gypsies” (term mostly used for Sinti and Roma , but also other groups traveling around) away.

In Bremen and the surrounding area, it is customary for men who turn 30 without being married or engaged to sweep publicly, for example on cathedral stairs or marketplaces . In order to find a woman to marry, the man should show in this way that he can look after the house and yard. It has to be swept until a virgin is found to kiss free.

In Jainism , monks and nuns carry small, bushy brooms with them as one of their few personal possessions. With this they carefully sweep small organisms such as insects out of the way on their hikes and alms-giving so as not to injure or trample them; for according to Jain teachings this would cause bad karma . The head of the order must award the broom to the applicant upon entry into the respective order.