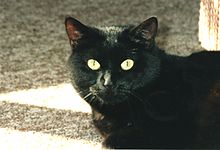 The black cat, in superstition a good luck or bad luck charm (popular belief distinguishes between the direction of travel). Black cats and dogs are considered difficult to place in animal shelters because they are assumed to be more aggressive.

Superstition , rare superstition , called a "respected as erroneous belief in the efficacy of supernatural powers in certain people and things" (z. B. witchcraft or talismans ), including an idea of the work of anthropomorphic imaginary demonic forces. Superstition can be found in the lives and actions of people in all cultures and times. Such ideas exist both in culturally generally recognized collective thought patterns and rites, e.g. B. in belief in luck or bad luck symbols ( symbols of luck ) or in proverbs (eg " toi, toi, toi "), as well as individually.

The term “superstition” ( Latin superstitio ) is applied negatively to forms of belief and religious practices (cults) that do not correspond to the “right” and “generally valid ” system of cultural convictions and doctrines of the “ruling” religion or worldview . In this respect, it can also be used to describe exaggerated religiosity ( superstitio - "superstition"). In circles influenced by Abrahamic and religious beliefs , the term is used among like-minded people to indicate a lack of theological education, but also to denigrate popular (cf. for example popular piety ) and occult beliefs. “Superstition” became the battle term after the Enlightenment / Counter-Enlightenment in the 18th and 19th centuries within the (Christian) denominations (see Kulturkampf ), but also a value judgment for newly emerging spiritualistic or medical methods and theories such as animal magnetism or hypnosis . Since the term is defined by the prevailing world view and belief, the content is determined by the respective scientific or religious standpoint of the performer. From an atheist point of view, every religion is superstition.

In scientific usage, the term has largely been replaced by the term popular belief, which goes beyond the ecclesiastical terminology . Medical superstition can be found in folk medicine , among other things . That since the 16th century common word "superstition" served the clergy increasingly battle cry against heresy and heretics and was in the 19th century by the resulting Folklore first reinterpreted positively as an idea of simple but unsophisticated population ( "popular belief"). Since the beginning of the 20th century, attempts have been made, particularly by the human sciences , to research the psychological and sociocultural foundations of superstition.

In common usage, the term “superstition” is equated with irrationality and unscientificness, is close to the Latin term superstitio and can be understood as “false insight into the naturalness of events”.

The term superstition has been used since the 12th century ( late mth. Abergloube ) and was widespread in the 16th century. According to today's etymological dictionaries, the word component “but-” originally meant “after, against, behind”, although it later assumed a derogatory meaning and denoted the opposite of what the second word component expressed, e.g. B. with "Aberwitz". The word came into use as a loan transfer of the Latin term super-stitio . The term was derived from after-belief (= disbelief) and stood for "false", i.e. H. Belief contents and forms which deviate from the Christian doctrine. Superstition was considered pagan, immoral, and heretical .

The conversion of the heathen was completed in Europe, but the local folk beliefs lived on within certain limits: magic , amulets , evil eyes , holy trees and holy groves were not intended to dissuade Christians from the true faith. In addition, one wanted to counteract the new pre-Reformation and sectarian influences with the term superstition. Church critics and dissenters, the heretics, should be placed on the same level as witches and wizards . The rule-based knowledge of the emerging natural sciences was defamed: knowledge or wanting to see instead of faith and trust was suspected of arrogance and fanaticism, and was therefore in contradiction to Christian ethics.

In antiquity, the term “superstitio” could occasionally be used in a morally neutral way, a “superstitiosus” was a fortune teller . As a rule, however, this meant an exaggerated fearfulness and dubiousness with regard to religious matters. According to the philosophy of the Stoa , true religion and piety were the middle ground between atheism , with too little, and superstition, with too much attention to religious matters. The Greek philosopher Plutarch, who is close to Middle Platonism , condemns as superstition everything that is done to the gods out of fear of harm and ruin. Among the church fathers, Lactantius then defines “religio” only as the veneration of the “true God”, which belongs to Christians alone. The pagans' belief in many and false gods is thus superstition (superstitio)

Augustine adopted the term “superstitio” to denote non-Christian religions. He laid the theoretical foundations of medieval teaching on the history of superstition. In his works De civitate Dei , De doctrina christiana , De divinatione daemonum and De natura daemonum he dealt extensively with superstition. As Bishop of Hippo, he was particularly confronted with the belief in amulets, which he believed posed a serious threat to Christianity. He adopted his terminology and his knowledge largely from Marcus Terentius Varro . He essentially adopted the doctrine of demons from the Neoplatonists . Augustine assumed the real existence of demons. They populated the world state after him ("civitas terrena" or "civitas diaboli"). In order to escape a dualistic worldview, he explained the demons as angels who had fallen prehistorically and who had been cast out by God . The magical practices were of pagan origin, and Augustine saw superstition as an attempt to gain security with the help of the pagan gods who were identified with the demons. Thus, superstition was identified with pagan idolatry. Even Thomas Aquinas understood superstition as moral, intellectual and religious decay. He interpreted idolatry as a form of “superstitio”, but also dealt with superstitious forms of Christian worship that was actually correct; these are nevertheless sinful.

In the age of the Enlightenment , a fundamental change took place: instead of the question of correct belief, there was an effort to determine the scope of rational judgment and scientific principles. Superstition was seen as a deviation from reason and was primarily a historical and social educational problem. The Enlightenment was directed against religious superstition, among other things, and developed a " religion of reason ". Immanuel Kant said, for example: "Superstition is the tendency to place greater trust in what is believed to be not natural than what can be explained according to natural laws - be it in the physical or moral ." The term superstition denotes - According to a definition of the social psychologist Judd Marmor - beliefs and practices that are scientifically unfounded and do not correspond to the level of knowledge achieved by a society.

Superstitious practices can generally hide the wish to banish the unknown or threatening (including illnesses) through evocative actions or utterances, or to bring about happiness. These ideas exist both in culturally recognized, collective thought patterns and rites, such as in the belief in luck or symbols that bring bad luck (gifted bad luck charms ) and sayings, but also on an individual level with very personal objects, habits and actions that have their own hidden, directing powers be measured.

Superstition arises from the wrong connection between cause and effect . The magazine Brain & Spirit wrote in 2009: "People tend to believe that simultaneous events are causally linked, although in reality they are independent of one another." If two events coincide once or twice, a causal connection would be assumed, so that a superstitious connection Behavior arises relatively quickly. Conversely, it would take many non-coincidences to dispel this suspicion again.

In psychology , superstition is closely related to terms such as magical thinking , self-fulfilling prophecy , and belief in the "surefire system" in gambling (see probability ). He arises z. B. in non-deterministic experiments (e.g. the experiments with domestic pigeons filmed by Burrhus Frederic Skinner and the so-called superstitious rats ). Superstition and magical practices are relevant to developmental psychology, as children in a so-called phase of egocentrism can turn to a magical-superstitious worldview .

The psychologist and parapsychologist Hans Bender called for a critical-scientific investigation of the superstition, since he suspected a previously unexplored collective knowledge of different cultures in the sense of the uniformity of the occult that he postulated .