The title of this article is ambiguous. Further meanings are listed under Talisman (disambiguation) . 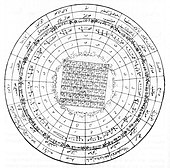 A talisman from the pen of the Persian religious founder Bab

A talisman (plural: talismans ) is a small object or a memento to which magical, good luck properties are attributed. This distinguishes it from the amulet , which is also used to ward off disaster.

The word talisman was borrowed in the 17th century from the Italian "talismano", which means the Arabic طلسم / ṭillasm goes back and means "magic picture". The Arabic word, in turn, can be traced back to the Middle Greek “τέλεσμα (télesma)”, which means “tax, consecrated object” or, in Byzantine, “magic object”.

The talisman plays an important role in Arabic tales. Similar items were the scarab of the Egyptians , the Abraxasgemme the Gnostics , the mandrake and the Allermannsharnisch the Middle Ages, the Victory Stone Wieland forecast and the amulet described mostly with magical characters and sayings. The Ruyi scepter is one of the most common talismans in the Chinese culture .

The hare's paw , four-leaf clover, horseshoe and lucky penny are symbols of luck . A special feature is the temporal constancy with which a talisman should develop its effect - in contrast to the simple lucky charm, which often only has a selective function. A talisman is chosen and owned by its user with regard to its hoped-for future effect, a simple lucky charm, on the other hand, is not so closely connected to the recipient of the luck and can also be interpreted as such in retrospect. Something or someone then presumably brought luck in a situation.

Unlike simple found objects that serve as symbols of luck, a talisman is traditionally made by a person who specializes in this for a specific client.

Among the most important works of western style that deal with the production and use of talismans, Das Schwarze Huhn also counts Black Pullet or La poule noire . The grimoire from the French cycle of Napoleon's time deals with the story of a French officer who is said to have been cut off from the troops during Napoleon's Egyptian campaign and introduced to the art of talismans in the Great Pyramid .

While the first part of the work is fictional, the second part deals with talismans, their nature and manufacture. A second work is the “Introduction to the Entire Area of ​​Occultism” by Manfred Kyber . The work, published at the beginning of the 20th century, treats talismans as the lowest form of the occult , before it goes on to divination , the prophecy of Nostradamus and out-of-body experiences .