This article covers the beetle (Egyptian art). For terms and personalities with similar names, see Scarabaeus .

As scarabs ( lucky beetles , ancient Greek σκαραβαίος skarabaios ) are images of the sacred pill turner ( Scarabaeus sacer ) in ancient Egyptian art (painting, sculpture and jewelry). They were mainly used as small amulets made of stone. However, there were also large sculptures made of stone at temples. The ancient Egyptian name for the scarab was cheperer . Depending on the hieroglyphic spelling, the scarab beetle, dung beetle , the god Chepre (also Chepri) or a piece of jewelry in the form of a scarab was meant.

The liberation and rapid reproduction of this beetle in the Nile mud after the resignation of the Nile led to the opinion that it arises without reproduction, which is why it was considered a symbol of creativity. In its almost round shape, in the shiny, golden shimmering color of the wing-coverts, one found a resemblance to the shape and shine of the sun, the closest visible cause of education, and was consecrated a divine veneration (e.g. as the embodiment of the deity Chepre ). The scarab's behavior, rolling dung balls in front of it, made a reference to Re and his journey across the sky in the solar barge.

Importance among the ancient Egyptians 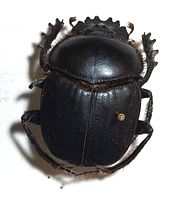 Specimen of a Scarabaeus sacer

The scarab has a strong solar aspect: it has been identified with the course of the sun. The dung ball then becomes the sun, which it shapes, transports and buries, which is equated with the sunset. From this follows a symbolization of the sun god Re, the ride in the sun barge and with Cheper , the appearance of Re as the morning sun.

The scarab replaced the click beetle as an amulet form and took over from it the meaning " resurrection and life". It was considered a lucky charm for the Egyptians.

The significance as a good luck charm and protective symbol results from the earlier assumption that scarabs supposedly feel the flooding of the Nile early on. The animals migrated away from the water, appeared in the houses and thus announced the longed-for flooding of the Nile to the Egyptians.

modern scarab made of painted soapstone

Forms of representation and use

They are usually pierced lengthwise so that they could be worn on a thread or in a ring. The first scarabs appear at the beginning of the Middle Kingdom and seem to have had an amulet or seal character. According to the Middle Kingdom, their underside is usually decorated with patterns, hieroglyphics or symbolic representations.

Scarabs also served as seals , e.g. B. from wine jugs etc. The seal carabs differ essentially only in the lettering on the underside. At the end of the 12th Dynasty and in the 13th Dynasty , they are also labeled with the names of rulers and officials. The official seals disappear at the beginning of the New Kingdom . Around this time the tradition of scarabs spread as a seal in the Middle East , where Egyptian motifs were partially imitated; local traditions with other images also developed. Domestic seals in Egypt with the title nebet per ( nb.t pr , "mistress of the house") persisted for a long time.

Top of the "wedding scarab" Amenophis III. and the Teje , 18th Dynasty

Amenhotep III began with the publication of five "scarab rows", which were supposed to bring the news about certain events to the remote provinces and friendly countries. The first of these is the so-called "wedding scarab" and certainly the most famous: It reports on the king's wedding with Teje . The manner in which his in-laws were named (only by name, without title) gave rise to the assumption that his wife Teje was of bourgeois origin.

These are much larger formats without a hole, on which the Book of the Dead 30 (a or b) is often noted (the weighing of hearts by Thoth ). It was only used in the context of a grave. It was placed on the mummies next to the heart, but did not replace it. The oldest examples come from the 13th Dynasty (approx. 1750 BC) (see e.g. Nebanch ). In the New Kingdom and later, they are standard in high-quality grave furnishings.

One of the largest known scarabs with a length of about 1.5 m. It is probably from the Ptolemaic period (300–30 BC) and was found in Istanbul. It's in the British Museum .

The amulet scarabs are usually no longer than 1-1½ cm. The larger ones, up to 5 or 6 cm in length, bear religious inscriptions and were wrapped in bandages. The message scarabs reach roughly the same size. Due to the increasing mixing of Egyptian, Gnostic and Christian doctrine, some Christian inscriptions can also be found on these gems .

The appearance of the top of the scarabs has been subject to stylistic evolution over time. An experienced Egyptologist will be able to date a scarab based on certain characteristics. In the early days, for example, they were gem-like with only a hint of division, corresponding to the boundary between pronotum and elytra . This division refined over time and the top became more plastic. From the 18th dynasty , under Akhenaten ( Amarna period ) and the subsequent Ramessids , the type had come so close to the natural model of the animal that next to the indicated wings on the edge, legs and fine hair can be seen on them. Scarabs from the late period , on the other hand, lose their naturalistic appearance and are increasingly designed in a more schematic way.

Meaning in the written language

In the hieroglyphic script of ancient Egypt , the scarab is the ideogram for the word cheper ( ḫpr ), the main meaning of which is “will” or “arise”. The young beetles were observed hatching from the ground. As the young beetles feed on the dung, they eat their way into the earth and then hatch out of the earth as beetles. This is why the scarab stood for fertilization and rebirth in ancient Egypt.

Takeover by other cultures

Scarabs were also found in Phoenician and Punic tombs in Sardinia and Etruria .