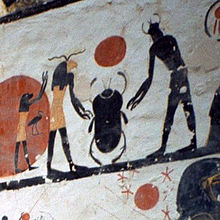 Chepre in the grave KV6

This deity was mostly depicted as a scarab (dung beetle), more rarely as a person with a scarab head. Images in graves, on coffins or as pectorals show him with outspread wings.

His name means "the one who arose by himself", just as the Egyptians believed that the sun emerges from the earth every morning. The connection to the scarab is that it lays its eggs in a ball of dung and it seems that its young, like the primordial god himself, arise without an act of procreation. The beetle pushes the ball of dung in front of it like a ball, just as the scarab pushes the sun disk over the horizon in the morning.

Chepre is also associated with resurrection symbolism. In addition, he is only one of the three figures of the Re . Haracht embodies the midday sun and Aton the evening sun.