This article covers the magical curse. For other meanings, see The Curse . 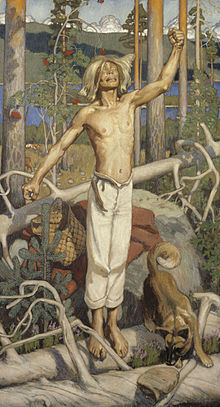 A curse or a curse is a spell (occasionally also associated with an associated gesture ) which is originally intended to bring calamity to a person or a place in a ritualized ( magical ) way or to induce or force atonement . Anger or the desire to punish or take revenge can give rise to it. Those who are effectively cursed need neither be present nor be aware of the curse. Its opposite is the blessing .

Colloquially, there are numerous sunk curses, which then serve more to insult others (e.g. get the devil! ) Or to discharge one's own anger (e.g. the curse word shit , which is popular in Germany ! Or more recently that from English Accepted Fuck !).

The Federation against Cursing has existed in the Netherlands since 1917 .

In its original sense, a curse was a serious social sanction so long as it was believed to work, even beyond the intention of the person who cursed it.

According to Maximilian Oettinger, who examined the curse in Jewish and Christian tradition, there are five elements that can be observed in a curse:

The worst increase was the father curse; the oldest recorded man's curse in the Bible is such, namely that of Noah on his grandson Canaan, the son of Ham . But according to Jewish and Christian doctrine, God first of all cursed the serpent and then the earth ( Gen 3:14, 17  EU ). In the Gospels there is a punitive miracle of Jesus, the curse of the fig tree .

In the Koran , sura 111 contains a curse against Abu Lahab , the uncle of Muhammad .

The curse in the arts

In the sense of a sanction, curses from magical beings or people also appear in fairy tales . Often they cannot be reversed, only mitigated, as in the case of Sleeping Beauty . Often curses appear there as curses , by virtue of which the cursed person changes permanently (examples: loss of memory or character traits, unawakening sleep, transformation into an animal or a stone, infirmity and death).

The motif is not infrequently used in mythology (see illustration ) and in fiction. A classic example is the curse of Nils Holgersson (who was transformed into a little wimp in order to learn to understand the suffering of animals) in the children's book The wonderful journey of little Nils Holgersson with the wild geese or the novel trilogy by Selma Lagerlöf : The Ring des Generals (1925), Charlotte Löwensköld (1925) and Anna, the girl from Dalarne (1928), where a generation-spanning psychological constellation appears to those who have lived through it as the result of an old curse.