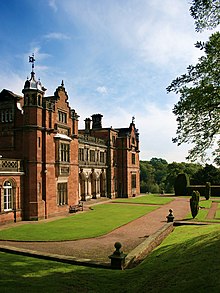 The University of Keele ( English Keele University ) at Newcastle-under-Lyme in Staffordshire , England , is the largest campus university in Great Britain .

The University College of North Staffordshire was founded in 1949 and received university status in 1962, when it was renamed The University of Keele . This is still the official name, although the university now refers to itself as Keele University .

Most of the buildings on the campus are architecturally sober functional buildings that were created after the Second World War . The oldest building is Keele Hall , a stately mansion rebuilt around the middle of the 19th century on a former manor that was once owned by the Knights of St. John and that came to the English royal family after this order was dissolved in England. It was bought by Sir William Sneyd for £ 344 in 1544 . During the Second World War it housed military installations. A large park adjoins Keele Hall.

The university offers courses in numerous fields of natural sciences, humanities and social sciences. In 2002, the Keele University School of Medicine was established, offering five years of full medical studies. During the first two years, medical students' training takes place on the university campus. The further, practice-oriented training from the third to the fifth year is carried out in cooperation with the University Hospital of North Staffordshire in Newcastle-under-Lyme .

In 2004, the University of Keele made international headlines with the publication on the Internet of around five million aerial photographs of the Second World War it digitized from the Aerial Reconnaissance Archives of the Royal Air Force .