The King's College London (colloquially called King's or KCL ) is one of the most prestigious higher education institutions in the world and the oldest college of the University of London and one of the oldest and richest universities in the United Kingdom . It was founded in 1829 and got its name after the patronage of King George IV.

The college traditionally ranks at the top of national and international comparisons, making it one of the most renowned universities in the world. A total of twelve Nobel Prize winners were educated at King's College or did research at the university. 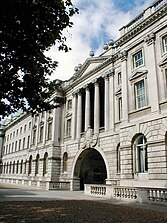 King's College was founded right next to Somerset House on London Street Strand , the campus is still in use today, the building, constructed in 1831, has since been expanded several times and built around the original building. Particularly noteworthy is the College Chapel, designed in 1864 by Sir George Gilbert Scott in Gothic-Byzantine style. Today the Strand Campus houses the faculties for Arts & Humanities, Law, Social Science & Public Policy and Natural & Mathematical Sciences as well as the Student's Union.

The university has since grown by several campuses , such as Guy's campus near London Bridge , St. Thomas' campus opposite the Houses of Parliament , Waterloo campus, Hampstead Halls campus and Denmark Hill campus in south London. Most of King's facilities are located around the banks of the Thames in central London.