from Wikipedia, the free encyclopedia
This is the spotted version , flagged on June 26, 2020 . There is 1 pending change that has yet to be viewed.

This article is about the London School of Music. The 18th century English opera company of the same name is shown under the Royal Academy of Music (Opera Company) .

The Royal Academy of Music building

The Royal Academy of Music is a music school in London , England , and one of the leading music institutions worldwide.

It was founded in 1822 by Lord Burghersh and the harpist Nicolas Bochsa . In 1830 the institution received an official legal status ( Royal Charter ) by King George IV "to promote the cultivation of musicology and to grant every opportunity to achieve perfection in it through the support and thorough instruction of all who wish to acquire knowledge in it" ( "To promote the cultivation of the science of music and to afford facilities for attaining perfection in it by assisting with general instruction all persons desirous of acquiring knowledge thereof" ). Since then, numerous prominent musicians have studied at the Academy. The composer and music teacher Cipriani Potter was the principal of the Royal Academy of Music from 1832 to 1859 and shaped it.

In 1911 the company moved from its founding headquarters in Hanover Square to its current location on Marylebone Road . 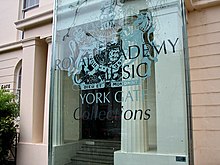 The Royal Academy of Music

The buildings are in the vicinity of Regent's Park . The facilities, including the 450-seat Duke's Hall and a modern theater, were expanded in 2001 with the opening of a new 150-seat concert hall and the York Gate Collections , a public museum for musical instruments and unique pieces from the Academy's outstanding collections. The Royal Academy of Music has a high-quality collection of over 200 string instruments from the violin family. These were purchased for students and newcomers, are maintained by the Academy's violin makers and include various Stradivaris, Amatis and Guarneris. The library's collection is over 160,000 items, with an extensive inventory of books and music editions, including important collections of first editions and manuscripts, as well as well-equipped with listening facilities. The library also houses the Sir Arthur Sullivan Archives and a Sir Henry Wood Archives. The most valuable holdings in the library include the manuscripts of Henry Purcell's The Fairy Queen , Arthur Sullivan's Mikado , Ralph Vaughan Williams Fantasia on a Theme of Thomas Tallis and Serenade to Music, as well as that of the newly discovered Gloria by George Frideric Handel ("This piece provides singers and Gamers have unlimited joy "- Rodney Milnes in The Times , March 2001). Support from the National Heritage Memorial Fund enabled the acquisition of the Robert Spencer Collection - one of the most outstanding collections of early English vocal and lute music, as well as a fine collection of lutes and guitars. The York Gate Collections can now show many pieces from it. The orchestral library has over 4,500 sets of orchestral parts and is constantly being expanded with new additions. The libraries of Sir Henry Wood and Otto Klemperer form important collections .

The students form a dynamic community in which more than 50 countries are represented and take various subjects from performing arts, composition, jazz or media to music theater and opera.

The Academy works with other conservatories around the world and also participates in the SOCRATES exchange program for students and teachers. In 1991 the Academy was the first English music school to introduce a fully accredited performing arts degree. In 1999 the Academy became a full member of the UK's largest university, the University of London .

In 2006 the Royal Academy donated an international Bach Prize , which it bestowed on Christoph Wolff as the first prize winner . The high honor is endowed with 10,000 pounds , which the London Kohn Foundation is making available. The winners are in chronological order:

Other musicians related to the Academy (selection)