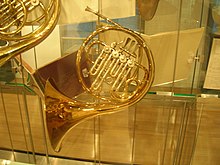 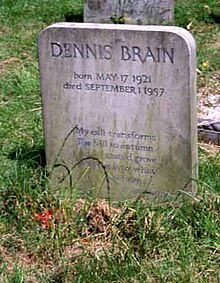 Brain was the offspring of a London horn player family. His father and uncle were both professional horn players, just like their father. He showed an interest in the French horn at the age of three , but initially took music lessons on the piano and later on the organ. From 1936 studies with his father at the Royal Academy of Music as well as piano studies with Max Pirani , organ studies with GD Cunningham. During the Second World War he was principal horn in the Royal Air Force Central Band, after the war in the Philadelphia Orchestra, the Royal Philharmonic and the Philharmonia Orchestra . He was also a sought-after horn player for chamber music. Brain was an avid sports car driver (e.g. 1939 12-Cyl-Lagonda, 1938 6-Cyl-Citroën, Triumph TR2 "). He died in a car accident after a concert on the drive from Edinburgh to London (380 mile trip ) in Hatfield, 17 miles from home.

Benjamin Britten wrote afterwards: "... an artist with the unique combination of the great technical mastery of his instrument, great musicality, the lively and intelligent interest in music of all kinds, a wonderful temperament and a lovable personality, was stolen from us."

Despite his short life, there are numerous recordings a. a. the concerts by Wolfgang Amadeus Mozart , Richard Strauss and Paul Hindemith , the Britten Serenade and a handful of recital pieces. In addition, chamber music and orchestral works. In a film he plays the Horn Sonata op. 17 by Ludwig van Beethoven with Dennis Matthews .