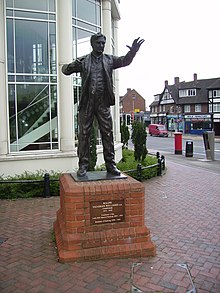 Vaughan Williams - son of a clergyman († 1875) - grew up in Leith Hill Place ( Surrey ) and received his first music lessons from an aunt. After his school days at the elite English school Charterhouse School , he studied from 1890 at the Royal College of Music in London with Hubert Parry and Charles Villiers Stanford , then from 1892 to 1895 when Charles Wood at the Trinity College of Cambridge University and in 1896 again in London, where his close friendship with Gustav Holst began. In addition, he took lessons from Max Bruch in Berlin in 1897 , in the same year he married Adeline Fisher.

From 1896 to 1899 Vaughan Williams worked as an organist in London . Soon he was busy collecting and publishing English folk songs ( Bushes and Briars , 1903) and also discovered the English music of the Renaissance for himself. Both influenced his compositional style considerably. In 1905 he became musical director of the Leith Hill Musical Festival (until 1953), in 1906 he published a new church hymn book , The English Hymnal . In 1908 he stayed in Paris to take further lessons from Maurice Ravel .

In 1910 his first major work, A Sea Symphony , was published later on, his first symphony, but actually a huge cantata for solos, choir and orchestra based on words by Walt Whitman . In the same year one of his most popular works was published, the Fantasia on a Theme by Thomas Tallis . The song cycle On Wenlock Edge followed in 1911, followed by his second symphony, A London Symphony , in 1913 . The German premiere at the German Opera House in Berlin was conducted by Ignatz Waghalter .

In the First World War Vaughan Williams served in France as a soldier. The noise of the guns damaged his hearing, leading to deafness in later years. His deeply felt impressions of these years are reflected above all in the third symphony, the Pastoral Symphony for soprano and orchestra, which was sketched in 1916 but not performed until 1922. In 1919 he became a composition teacher at the Royal College of Music in London (until 1938), and from 1920 to 1928 he directed the London Bach Choir. He also appeared more and more frequently as a conductor of his own works.

Vaughan Williams received numerous awards in the following years. Its fame increased with the ballet Job (1930) based on the biblical story of Job , the fourth symphony (1935) and symphonies 5 (1943) and 6 (1947) from the years of the Second World War . In 1940 Vaughan Williams also wrote his first film music with 49th Parallel .

In 1944 Vaughan Williams composed A Song of Thanksgiving as a commission for the BBC . Under the original title Thanksgiving for Victory , the piece was recorded in the final weeks of World War II and broadcast on the occasion of a radio thanksgiving service on May 13, 1945.

For the coronation of Queen Elizabeth II , Vaughan Williams wrote an arrangement of the chorale All people that on earth do dwell , a version of Psalm 100 with the melody The Old 100th ascribed to Louis Bourgeois as an offertory (song to bring gifts). The composer had planned that, for the first time in centuries, not only a choir, but also the congregation should sing along at the coronation, with the gathering of peers joining the singing in unison in the concluding doxology To Father, Son, and Holy Ghost . The Lords could not meet the unusual demands, but the piece did not fail to have an effect on the listener.

However, his operas were less successful . Neither Hugh the Drover , which premiered in 1924 but began in 1910 , and Sir John in Love (1929), another setting of Shakespeare's Falstaff material , remained in the repertoire.

For Vaughan Williams, however, the greatest disappointment of his career as a composer was the poor reception of the oratorio opera The Pilgrim's Progress (1951) after John Bunyan , on which he had worked for over forty years. In the same year his wife Adeline died after a long and serious illness. In 1953 he married Ursula Wood (1911–2007). Among the works of recent years, the seventh symphony Sinfonia Antartica (1952), which was based on the film music Scott of the Antarctic , and the late ninth symphony (1957) stand out. In 1949 Williams was elected to the American Academy of Arts and Letters , in 1953 an honorary member of the International Society for Contemporary Music ISCM and in 1957 to the American Academy of Arts and Sciences .

After Vaughan Williams 'death, his ashes were buried in Poets' Corner at Westminster Abbey , London .