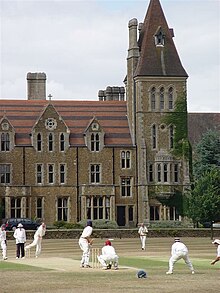 Cricket game at the Charterhouse School

The Charterhouse School is a traditional, elite private school ( public school ) in Godalming in Surrey in England . The school was founded in 1611 according to the will of the merchant Thomas Sutton on the site of a former charterhouse in Charterhouse Square in Smithfield , London with money from his estate. Even today, the students are called Carthusians (Carthusians), the former as Old Carthusians or OCs . The 2014 annual school fee for tuition, room and board was £ 34,245 .

The school was relocated from London to its present location in Godalming in 1872. The school buildings designed by architect Philip Charles Hardwick were built on a hill above Godalming. In addition to the main buildings, the three boarding houses Saunderites, Verites and Gownboys were built.

Today the school comprises the following boarding houses (listed according to the year of foundation, the school's internal abbreviation and the color of the respective house):

The following "new" houses were founded around 1875:

Until the 1970s, Charterhouse was an all boys' school; Meanwhile, however, a good third of the schoolgirls successfully graduate from school (A level).

The Charterhouse School was the only one of the English public schools in which the modern game of football was developed to be present when the English Football Association (FA) was founded in 1863, but was not actually one of the founding members. However, in 1867 the Football Association adopted the rules of the game favored by the Charterhouse School and Westminster School . The Old Carthusians FC , in which former students play school, won in the season 1880/81 the FA Cup .

Joseph Addison and Richard Steele met at Charterhouse School in the 1680s. In addition, the founder of the Boy Scout Movement, Robert Baden-Powell graduated there as well as the English composer Ralph Vaughan Williams and the author and caricaturist Max Beerbohm . The school's internationally best-known graduates in the 20th century include the founding members of the rock band Genesis and the science historian Geoffrey Lloyd .