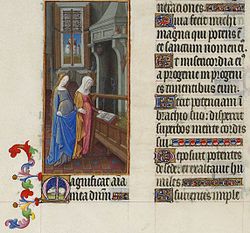 The Magnificat in the Duke of Berry's Book of Hours

With the words " Magnificat anima mea Dominum" ( "My soul magnifies the Lord") begins on Latin song of praise of Mary , one of the three canticles of Luke's Gospel ( Lk 1.46 to 55  EU ) and falls within the framework of the childhood story that Luke handed down in view of Jesus. It is sung in the Liturgy of the Hours and is named after its opening words . But it is also in the Christian festivals of Christmas anchored liturgical, because it more broadly to the Christmas story belongs.

In the presentation of the Gospel of Luke ( Lk 1.26–56  EU ), Mary visits her cousin Elizabeth , who is pregnant with John the Baptist, a few days after the preaching by the Archangel Gabriel . This incident is called the Visitation of the Virgin Mary . Mary answers Elizabeth's prophetic greeting with a hymn in the style of the Psalms . The Magnificat is an old Marian song. This is "not uncommon in view of the series and importance of Old Testament women's songs that tradition ... passes on". This is followed by the birth of John the Baptist. The hymn has multiple echoes of the hymn of praise of Hanna , the mother of the prophet Samuel , in 1 Sam 2  EU .

On the basis of her faith, Mary praises God as the one who turns to her and all the low, the powerless and the hungry in order to lift them up, whereas the mighty, rich and haughty are thrown from their thrones. Mary herself "belonged to the lower classes of the people, to the lowly and ineffective, even if she was betrothed to a Davidid and perhaps came from the royal family herself".

The Magnificat is Mary's longest verbatim speech in the New Testament.

Parallels in the Septuagint

The Magnificat is fed by thoughts from the Psalms and the Hebrew Bible . Lukas processed a number of quotations in his Magnificat, as the following overview shows:

The lack of originality of the Magnificat has been criticized, since it is “just an accumulation of different scriptures, a series of Old Testament thoughts. But this mosaic-like summary of scriptural words results in an original whole, since it praises a unique event, the election of Mary as the mother of the Messiah, and is harmoniously adjusted to it. It is not unusual when a devout Jewish girl, deeply rooted in the religious beliefs of her people, expresses her gratitude with words of the Scriptures. "

The Magnificat is only contained in the Gospel according to Luke , who of the evangelists is most interested in the marginalized, and propagates the importance of this theological concern right at the beginning of the Gospel. Modern interpretations like to underline the strength of Mary and the "revolutionary" aspect of her song.

The representatives of dialectical theology in particular repeatedly stated the harsh content of this New Testament Psalm:

Karl Barth presented the Magnificat during the Advent season of 1962 in the prison in Basel as part of a prison service and said in summary: "In a house in which the labored and burdened, the poor and the poor, the really hungry live - and therefore in a house like that, in which we are right now - fits the Christmas party perfectly. Only in such a house! But definitely in one of these! "

Dietrich Bonhoeffer writes about the Magnificat: “This song of Maria is the most passionate, wildest, one could almost say the most revolutionary Advent song that has ever been sung. It is not the gentle, tender, dreamy Maria as we see her in pictures, but it is the passionate, carried away, proud, enthusiastic Maria who speaks here ... a hard, strong, relentless song of falling thrones and humiliated lords of this world , of God's violence and of human powerlessness. "

Helmut Gollwitzer headed a sermon on the Magnificat with the words: God is the revolutionary and then stated: "God keeps messing everything up, and the interplay of history that we observe at all times is his work."

In the feminist theology and the theology of liberation , the Magnificat also plays a major role:

Wilhelm Fuhrmann expresses that the framework of the Magnificat represents "a story of two women - without a man". Fuhrmann interprets the song of Mary in liberation theology as a “revolutionary song”, which aims at the total change of conditions and circumstances: the poor and the powerless should be helped, at the expense of the rich and powerful. It is remarkable that this world revolution song is put into a woman's mouth by Luke. Through the birth of Jesus, Mary experienced her “de-humiliation”.

Dorothee Sölle also takes up the idea of ​​the liberation of women: “My mind will come out of fear. The empty faces of women will be filled with life and we will become human beings. [...] The rule of males over females will come to an end "and" objects become subjects ".

Bärbel Wartenberg-Potter also emphasizes a strengthening of the role of women: God make “out of a small, humiliated, fearful woman a strong, significant, courageous woman, gives her the strength to transform the externally miserable situation into something strong. [...] The kingdom of God will reverse the social fabric of injustice ”. Mary's prophetic message also applies to the power structures between women and men, within which most women still belong to the powerless and poor. Maria rehearses "the reversal of the sexist balance of power". She contradicts the humiliations that marked her time.

Liturgy of the Hours and Gregorian Chant

The Magnificat is one of the basic texts of Christianity . In the Divine Office it is part of the morning prayer in the Eastern Church . In the western church, on the other hand, it is the highlight of the evening Vespers , in which it is sung solemnly in Gregorian style (on Sundays and festive days it is festive with incens and in some places with candlesticks ).

Like the Psalms and the other Cantica , the Magnificat ends in Vespers with a doxology , the Gloria Patri (“Glory to the Father”).

Martin Luther suggested singing it on the 9th psalm tone . For the Protestant Church he determined: “It is fair to let this song remain in the Church!” , Although otherwise he wanted to see Marian piety limited.

Jacques Berthier created several versions (four-part choral compositions, canons ) of the Magnificat for the daily prayer of the Taizé Community , which have found their way into many European hymn books and meditative liturgies.

Based on the appreciation of the Magnificat by Martin Luther (see his well-known Magnificat interpretation), a number of Magnificat paraphrases arose in the Protestant area. Erasmus Albers ' Mein Seel, o Lord, must praise you (from the year 1534) found its way into the Evangelical Hymnal (EG 308). Other Magnificat songs are:

The Magnificat belongs mainly to the Advent season , the Magnificat songs are assigned to the beginning of the church year , i.e. Advent , in many church hymn books . The Magnificat is spoken at this time by the congregation both as a liturgical prayer of the New Testament and in the form of songs. It prepares for the expected Christmas .

The Magnificat is also the gospel for the Feast of the Visitation on July 2nd. On this occasion, Johann Sebastian Bach composed the cantata Meine Seel auf den Herren , BWV 10, in 1724 .

The earliest polyphonic fragment comes from the mid-14th century. After that there were well-known works with this title, among others by:

Some composers have created several versions, adapted to the skills of the choirs or soloists scheduled for the (first) performance .

In the musical language of popular music, the Magnificat was z. B. by Michael Benedict Bender (My soul magnifies) , Ludger Stühlmeyer (children's cantata Open up, become light ) and Alan Wilson (My soul praises the greatness of the Lord) .

The oratorio Laudato si ' by Helmut Schlegel OFM with music by Peter Reulein for choir, orchestra and organ is based on the Latin Magnificat and texts by Pope Francis from the encyclical Laudato si' .

In addition to the vocal settings of the Magnificat, there are also numerous compositions for organ, primarily from the 16th and 17th centuries, which use the cantus firmus of the Magnificat in the various church tones as the basis for so-called verses . Almost all organ composers of this time contributed works to this; Special mention should be made of compositions by Heinrich Scheidemann in the I. to XIII. Ton, Girolamo Frescobaldi , Johann Caspar Kerll , Claude Balbastre , Jean-François Dandrieu , Nicolas Antoine Le Bègue , Jacques Boyvin , Michel Corrette , Jean-Adam Guilain or Johann Erasmus Kindermann . The individual verses of the Magnificat were performed alternately with a choir or a schola.

In the course of the efforts to create collections of light, high-quality organ music for the various liturgical circumstances of the church year, such Magnificat verses were again written by romantic composers, e.g. B. by Alexandre Guilmant and César Franck in L'Organiste . In the 20th century, Charles Tournemire also created his Postludes Libres pour des Antiennes de Magnificat op.68 in this tradition .

The tonus peregrinus , which is commonly associated with the Magnificat as the psalm tone, was underlaid with a German text (“Meine Seel röst den Herren”) and in this form is one of the most famous evangelical chorales . This was taken as the basis for a large number of fugues, including Johann Sebastian Bach for his fugue on the Magnificat pro organo pleno BWV 733; The 4th Schüblerchoral BWV 648 is also based on this melody, this is a transcription of an aria from the cantata Meine Seel raises the gentlemen , BWV 10, which is based on the German Magnificat . A well-known romantic organ work that also quotes the tone peregrinus is the organ sonata No. 4 in A minor op 98 by Joseph Gabriel Rheinberger .