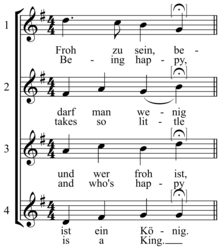 Under canon (. Plural: canon, Greek for "scale guideline rule"; adjective: canonical) refers to a polyphonic composition in which a voice activated after the other, the first voice - almost as a guide - by the other voices is copied exactly. Usually in the prime or octave , all voices follow the same melody at the same pitch, only offset in time. However, there are also canon compositions in which the other voices follow in a third , fourth or fifth interval .

Originally, the Latin term canon in medieval music theory did not mean a musical genre, but - according to the meaning of the word - an instruction. Such instructions were used either to repeat individual parts of compositions - possibly transformed - or to derive further parts from them counterpoint . The canon as a generic term did not develop until the 16th century. Before that, at least for the strict canon, the term fugue existed . The first recorded canon Sumer is icumen in comes from 13th century England. The canon reached high points of artistry in the vocal polyphony of the Dutch in the 15th and 16th centuries as well as in baroque music , especially with Johann Sebastian Bach (e.g. The Musical Offering or Goldberg Variations ). At that time, the canon was viewed as a special case ( bound fugue or fuga ligata in contrast to the free fugue or fuga libera ) of the fugue , which is characterized by a more free imitation of the first part. Wolfgang Amadeus Mozart and Joseph Haydn wrote very elaborate canons. An example from the Romantic era are the strictly executed 15 canons in the Cammerstyl op.1 for piano by Friedrich Kiel, dedicated to Franz Liszt , at various intervals and sometimes with filling voices. Canons of all kinds enjoy great popularity today in the chants of Taizé .

The well-known strict canon is usually notated as a single melody line; the entries of the following voices are marked with 1st , 2nd , 3rd etc. in the relevant places .

In earlier centuries (e.g. in Palestrina ) a special canon symbol, the signum congruentiae , was used for this (see picture opposite).