This article deals with the musical interval; for other meanings of the same name, see Prime (disambiguation) .

In music, prime (more rarely: "prim", from Latin prima = "the first") is the first pitch of a scale and interval is the harmony or repetition of two tones derived from the same root note . When sounding at the same time, one speaks of " unison ", when it is played one after the other, "tone repetition" or "repetition".

In addition to the interval designation, the term prime or prim is also used synonymously for the term "root", in relation to the starting tone of a chord.

The prime as an interval

The pure prime is the interval between two identical tones. There is no gap between these, so the pure prime corresponds to 0 cents . It is treated like the octave in counterpoint and harmony .

It should be noted that two enharmonically confused tones (e.g. C sharp - D flat ) do not count as unison, but as a diminished second , although acoustically, depending on the instrument and / or the tuning used , they are almost or completely identical. Such intervals can occur when there is a key change within a melody and the note that sounds the same in the new chord has a different function, or when two melodies with different keys cross each other (e.g. in a dramatic film score).

The chromatic halftone step such as B. C - C # (upwards) or A - As (downwards). This designation is used within a scale z. This is used, for example, when a tone is set a bit higher or lower, or when one deliberately drops a tone or lets it rise, but then glides back to the target tone (a popular stylistic device in the blues or the so-called bending of the guitar or blues harp ). Another example would be if you raise or lower the key in a piece of music by a semitone and then describe the distance between one tone and the following tone (see: Modulation ).

The Prime as a musical creative tool

Example of the Prime as a continuous, creative principle of a composition:

There are two ways to use the Prime as a musical creative tool:

Stringing several primes together results in tone repetitions . These play a role in figure theory and in ornamentation ( exercise ). They also occur with special forms of the organ point . In the doctrine of affect , the prime can be assigned numerous meanings: the motive of death, rest in oneself, monotony. 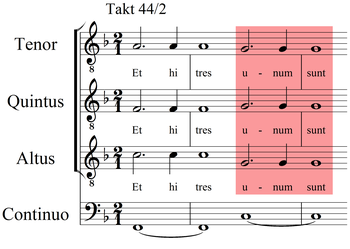 Note example from Marienvesper of Monteverdi to Prim in the distance

The prim as the interval of a chord cannot be heard. It can, however, be the starting point or the starting point for two or more vocal lines and often results almost inevitably in the final formulas of polyphonic works when two voices of the same pitch end in the same final note when dissolving different leads . A special effect results when all voices end a piece on the same note, i.e. a third or even a fifth is missing in the final chord. Example:

With the register instruments (organ and harpsichord), different sounds can be generated by adding or removing the register, since the pipes or strings tuned in unison differ in their sound characteristics. With the other instruments, the sound is changed by slightly detuning the strings against each other, as this creates beats that make the sound appear livelier compared to a purely tuned prim.

Tunable idiophones such as church bells , timpani and jew's harp can only produce tone repetitions as individual instruments.