The title of this article is ambiguous. Further meanings are listed under dulcimer (disambiguation) .

Representation of an angel with a dulcimer in Himmelkron Monastery

The dulcimer is a type of box zither , the strings of which are struck with mallets. The clapper or mallet are made of wood and can be covered with leather or felt . Chopping boards are stringed instruments that are also classified as percussion instruments based on the type of sound they produce . Regionally different forms of chopping boards are common between North America, Western and Eastern Europe, the Middle and Far East. The German term “dulcimer” is understood in a narrower sense to mean variations in shape that are at home in alpine folk music .

The instrument can be trapezoidal , semi-trapezoidal, rectangular or winged. Modern instruments have the shape of an isosceles trapezoid . Metal strings usually run over two bridges . Usually two, three or more strings are grouped per tone, so the dulcimer has two, three, four or five courses. The strings are tuned with tuning pegs. The design and choice of mallets have a major impact on the timbre. To achieve special effects you can also pluck the strings with your fingers ( pizzicato ). 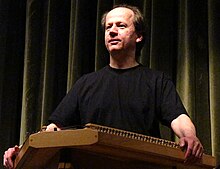 The dulcimer may have come to Europe from the Byzantine Empire , but there is little evidence of its existence before the mid-15th century. The oldest known illustration that can be reliably identified as a dulcimer is a medallion on the ivory lid of the Byzantine Melisende Psalter , which is dated around 1140. It shows King David striking a trapezoidal string instrument with two sticks. A direct organological reference to the rectangular chopping boards, which appeared in Central Europe 300 years later, at the beginning of the 15th century, is doubtful. An independent European development of this type with this style of play is more likely.

Paul M. Gifford (2001) believes that the prerequisite for striking strings is a drawn steel wire, which has only existed since the 14th century. Forged wire is unsuitable for musical instruments, and gut strings give a better sound when plucked. However, an influence from the Middle East seems likely for one of the forerunners of the chopping board, the psaltery . Gifford dates the psaltery to the 11th century; for the reasons mentioned above, it was plucked rather than struck.

The version that developed from the Psaltery in France was called doulcemèr in French , this name probably comes from the Latin dulce melos , "sweet song" or "lovely sound". In the English-speaking world the dulcimer is still dulcimer . Apparently, however, the German design became more popular than the French. The dulcimer has been unequivocally documented since 1370 in a series of Central European representations as an elongated bass instrument that was initially covered with only one and later with up to three strings. The body of the instrument was leaned against the shoulder while playing. This Central European (German) dulcimer developed from the string drum , the tambourin à cordes or string tambourine , an instrument struck with a stick, often with only one string, which is still played today in Provence by musicians who also use this instrument and play a one-handed flute ( galoubet ). This is how the dulcimer mostly played today emerged.

Around 1450 the terms Dulce Melos (Latin treatises), Doulcemer and Hackbrett (1447 in a Zurich council book) are used. A copper engraving from 1470 shows a further developed instrument, played by a lady of higher rank. It is equipped with four strings over two dividing bars and thus expanded to one and a half octaves ( diatonic tuning). "Dulce Melos" is the name of the chopping board in the Latin scholarly language of the 15th century. It can first be found in an untitled manuscript by the doctor and astronomer Heinrich-Arnold von Zwolle , written around 1440 in Dijon. It deals with the harp, organ, harpsichord and clavichord. The dulce melos also mentioned is a stringed instrument that is struck with a stick ("cum baculum fit contactus cordarum"). The same name appears in the "Tractatus de musica" (written around 1460) by Paulus Paulirinus de Praga . According to this, the Dulce Melos was a rectangular instrument with a sound opening, over whose soundboard metal strings were stretched. If these were struck with a stick ( ligniculo ) or a plectrum ( penna ), the sweetest tones and sounds would result.

As early as 1512, an altarpiece by the Dutch painter Oostzanen attests to the alternating stringing over a dividing bridge and through its openings. The picture by Virdung (1511) shown above also gives an idea of ​​this stringing.

Under the name Dulcimer dulcimer 1470 in England is detectable, the American variant hammered dulcimer since the beginning of the 18th century known. It differs from the Appalachian dulcimer , a slender American drone zither. The Iranian dulcimer santur was first depicted in the 17th century, but its name is older. In the 1950s, the santoor found its way into North Indian classical music. The Thai dulcimer is called khim . From the 18th century, box zithers struck with mallets probably came from Europe to China ( Yang-Qin ). Another theory is that the Iranian variant of the chopping board ( santur ) took the overland route via Central Asia. However, this is contradicted by the fact that the vortices of the Yang-Qin are attached to the beveled cover plate, as in the European dulcimer, but are attached to the flank of the Iranian and Iraqi Santoor. From China it spread to Korea ( Yanggum ), Japan ( Sangen Dakin ), Vietnam and Cambodia ( Khîm ).

The Eastern European cymbal was first recorded in Hungary in the middle of the 16th century. It has also been used by Jewish traveling musicians since 1637, who toast the Bohemian cymbal tradition in Prague . In the course of the 17th century, traveling musicians of various origins brought the instrument to the Ukraine and Belarus as a bandura . The development of the then legendary Pantalonian cymbal 1697 by Pantaleon Hebenstreit is based on Bohemian tradition. It was about four times the size of the normal dulcimer, had a double soundboard and used both metal and gut strings.

In 1717 the English dulcimer gained a foothold on the coast of North America, at the same time it is being adapted in China as Yangqin (yang ch'in, foreign zither). Meanwhile, the dulcimer in the shape of the Salterio ( salterio tedesco , literally German psaltery) found its way into Italian and Spanish baroque music . After hesitant beginnings, the dulcimer became very fashionable in some regions of Austria (Carinthia, Salzkammergut, East Tyrol and Styria) in the course of the 18th century.

In 1874 Venczel József Schunda in Budapest invented the very successful pedal cymbalon , or cymbal for short , in chromatic tuning and a string structure similar to the Salzburg dulcimer, but partly still diatonic . Shortly before the Second World War , Tobi Reiser from Salzburg and the instrument maker Heinrich Bandzauner developed a fully chromatic dulcimer without dividers, which is one of the 6 plus 6 instruments .

The common names for dulcimer in different countries can be divided into groups:

The traditional Italian name Salterio Tedesco (literally “German Psalterium”) for the dulcimer indicates the opinion widespread in Italy that the actually plucked psaltery is mainly struck north of the Alps.

Compositions in Art Music of the 18th Century

With the invention of the hammer piano , the mechanism of which took over the striking of strings with a hammer, the dulcimer disappeared from European art music for some time.

In some root regions of the chopping board, e.g. B. Hungary, Belarus and Upper Bavaria wrote and write academic composers for the instrument, for example:

In the Appenzeller Space Schöttl , Töbi Tobler focused on the dulcimer.

History of the dulcimer pedagogy

Until well into the 17th century nothing is known about educational activities in the dulcimer area. Such as Even today, dulcimer pedagogy is likely to have exhausted itself in amateur instructions from the immediate environment of beginners. The first professional dulcimer teacher was Pantaleon Hebenstreit . Self-taught himself, he had to train Max Hellmann, who was sent to Dresden by the emperor, on his huge pantaleon , which required five years of apprenticeship.

In 1754 the first booklet in the history of the chopping board was published. It comes from Minguet y Irol, is written for the southern Salterio and deals exclusively with the technique of plucking. After it was completely out of use around 1800, the work only had a very short-lived existence.

From the middle of the 19th century, dulcimer pedagogy really got going: In 1848 C. Haight published his “Complete System for the Dulcimer” in America, Joszef Schunda added methodical instructions to the pedal cymbalons he introduced in 1874, and in 1886 C. Roylance published his booklet How to Learn the Dulcimer in London .

The upswing then slowed down significantly: China did not follow suit until 1920 with the “Yue-diao-qin-zue-bian” dulcimer school, and the Belarusian version of Zhinovich was a long time coming after the Second World War.

In 1951 Walter Kainz from Voitsberg brought out a school for the Styrian dulcimer for the first time, " Dulcimer Fibel, A Guide to Striking the Styrian Dulcimer ", several editions. This school was later renewed and expanded by Max Rosenzopf from Bärnbach .

During this time a new kind of dulcimer began to spread in Austria and Upper Bavaria, which had been developed by Tobi Reiser shortly before the war: the instrument known today as the “Salzburg dulcimer” without dividers and in a fully chromatic tuning. Of course it took some time to get used to this innovation, but from the 1960s onwards, multi-volume instructional works were published in quick succession, first in 1978 by the Munich dulcimer lecturer Karl-Heinz Schickhaus, then by his successor Birgit Stolzenburg ("Pizz und Batt") Volume 1-4, 1997/98).

In 1979 Peter Pickow published a textbook: Hammered Dulcimer. A complete guide to the hammered dulcimer for the beginning and the advanced player , Music Sales Corporation Nex Yord, London, Sydney.

In 1984 another English textbook appeared: " Playing the Hammered Dulcimer in the Irish Tradition ", by Karen Ashbrook, in the same publisher.

In 2002 a jazz pedagogical textbook for the Salzburg dulcimer by Günter Ebel was published: Swinging Strings, Volume 1 - From syllable speaking to jazz music, Verlag vierdreiunddreissig, Munich.

In Budapest, Minsk and Beijing, the dulcimer in its respective country-specific appearance has been included in academic teaching, as well as in Bavaria and Austria.

Despite massive war losses, Germany still has the most abundant inventory of historical chopping boards. After the war losses, the Instrument Museum in Berlin only has eight copies (before the war 26), the Grassi Museum in Leipzig, however, still has 16 from what was once 25. The Germanisches Nationalmuseum in Nuremberg has the largest collection in Europe with 31 copies plus five Have a pair of mallets. You can find out more about the holdings on the museum's website (unfortunately without any illustration).