The kantele ( [ˈkɑntɛlɛ] , Finnish ) or Kannel ( [ˈkɑnːɛl] , Finnish and Estonian ) is a fretboard-free box zither that is mainly played in Finland , Estonia and Karelia . 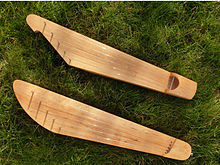 The plucked instrument in the older form consists of a wing-shaped sound box made of wood, which consists of a burnt-out birch trunk that has been hollowed out with the ax. On this five pentatonic tuned horsehair strings are attached. This method was used until the middle of the 20th century. They came in different sizes and mostly tuned in D major or D minor. The original five strings were expanded to up to twenty-three strings over time.

Modern kanteles can have up to 46 steel strings, which can be tuned a semitone higher or lower with the help of a lever system while playing. The instrument - like the Alpine zither - is played with the fingers on the lap or on a small table. Sometimes a pick is also used. A padded board that is attached above the strings can dampen all the strings by pressing down.

An electric kantele was also developed in Finland.

The C and G strings are marked with black and red markings on the body of the concert cantele shown above on the right, and the points of contact for creating flageolet tones are marked.

In Waldorf schools , a rounded, pentatonic-tuned plucked instrument is used, the development of which was inspired by the kantele and which therefore bears the same name.

The kantele can be played in two ways: Most players have the long strings directly in front of them (Haapavesi style), while players with strong traditional roots have the short strings turned towards them (Perhonjoki style or Perhonjokilaakso style). The styles are named after the town of Haapavesi and the Perhonjoki river , two centers of folk and kantel music.

In the Finnish national epic Kalevala , the old magician Väinämöinen made the first kantele from the jaw of a gigantic pike. The pegs are made from the teeth and horsehair is used for the strings. When he plays them, all the animals in the forest come over and listen; people let their work rest and are moved by the sound. He later made the second Kantele from a birch tree.

The kantele gives its name to the collection of poems Kanteletar ("kantele player"), which, like Kalevala, was also compiled by Elias Lönnrot .

At the Karelian University in Petrozavodsk there is a course in kantel building and playing, which is led by two skateboard masters. At the Sibelius Academy in Helsinki you can study traditional and modern kantelespiel.

Designation in other languages

The Finnish name of the instrument kantele , like Estonian kannel, is seen as a loan word from a Baltic language. In Latvian the corresponding instruments are called kokle , in Lithuanian kanklės . Lithuanian kantelis , on the other hand, is the song ( daina ). The gusli is similar in northwestern Russia . The Finnish jouhi kantele , with its related name, belongs typologically to the lyres .

According to two theories that emerged at the end of the 19th and beginning of the 20th century, the origin of the Baltic-Finnish word group around kantele is based on an originally Slavic word, which includes gusli ("Slavic theory") or on an Uralic original language, Finnish is derived, traced back ("Finnish theory"). Accordingly, the so-called string instruments could have been introduced by Slavs or developed in the Baltic-Russian region.