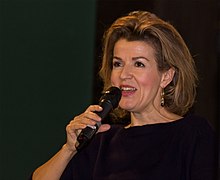 Anne-Sophie Mutter grew up in Baden-Württemberg Wehr on. Her father was the newspaper publisher ( Alb Bote ) Karl-Wilhelm mother. She wanted violin lessons at the age of five. When she won a competition after only six months, her career choice was clear. She was released from compulsory schooling and, in addition to piano and violin lessons, received private school lessons from Erna Honigberger .

Her formative violin teacher, to whom she always expresses gratitude for teaching in the master class at the Winterthur Conservatory at the time (now the Zurich University of the Arts ), was the famous Swiss virtuoso Aida Stucki , who is considered to be her real discoverer.

Anne-Sophie Mutter was the first prizewinner in the Jugend musiziert competition several times , the first time "with special distinction" in 1970.

The professional world became aware of the 13-year-old when she made her debut at the Salzburg Whitsun Concerts in 1977 with Mozart's G major concerto under Herbert von Karajan . Subsequent concerts and recordings with the Berlin Philharmonic under Karajan in the 1980s helped her to gain international fame.

Since then she has given concerts in all major music centers around the world. In 2019 she had her first open-air performance with the Royal Philharmonic Orchestra on Munich's Königsplatz .

To support young string players, she founded the Rudolf Eberle Foundation in 1987 and the Friends of the Anne-Sophie Mutter Foundation in 1997 . She is also a member of the board of trustees of forum thomanum Leipzig e. V.

The head of the Deutsche Grammophon label says that Anne-Sophie Mutter is an “identification figure” for the label, that she “basically took over the torch from her mentor Herbert von Karajan”.

Anne-Sophie Mutter was married to the lawyer Detlef Wunderlich from 1989 until his death in 1995 . There were two children from this marriage. From 2002 to 2006 she was married to the American composer , pianist and conductor André Previn . She lives in Munich . One of her two older brothers, Christoph Mutter (* 1961), is a lawyer.

On the recommendation and with the participation of the then Prime Minister of Baden-Württemberg Lothar Späth , the Emiliani was only pre-financed for her at the age of 16, which she was able to acquire later. The instrument was purchased through L-Bank in 1984.