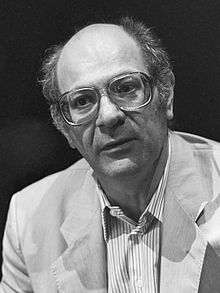 Mauricio Raúl Kagel (born December 24, 1931 in Buenos Aires ; † September 18, 2008 in Cologne ) was an Argentine-German composer , conductor , librettist and director . In addition to instrumental music and works for musical theater, his oeuvre also includes the composition and production of radio plays and films ; he made an important contribution to new music in the second half of the 20th century.

Mauricio Kagel was born in Buenos Aires in 1931 to a Jewish family who had fled Russia in the 1920s. He received private instrumental lessons at an early age and worked in Buenos Aires as a film critic , répétiteur and conductor , including at the Teatro Colón . Kagel had taken part in the Darmstadt summer courses for new music in the 1950s . In 1957 he traveled to Germany with his wife, the sculptor and graphic artist Ursula Burghardt (1928–2008), whom he married in the same year, on a grant from the German Academic Exchange Service . The couple had two daughters.

From 1960 he worked as a lecturer at the Darmstadt Summer Courses. In 1968, in collaboration with Wolf Vostell and others, Labor eV was founded, which was supposed to research acoustic and visual events. In Cologne the event 5-day race took place with his participation. In 1969 he was appointed director of the Institute for New Music at the Rheinische Musikschule in Cologne and, as successor to Karlheinz Stockhausen , was appointed director of the Cologne Courses for New Music (until 1975); In 1974 he received a professorship for music theater at the Cologne University of Music.

Kagel was a co-founder of the Ensemble for New Music in Cologne and has worked in the electronic studios in Cologne, Munich and Utrecht. He conducted many of his works himself and was the director and producer of all of his films and radio plays. On the occasion of his 75th birthday, he - a symbol of the German-Argentine cultural dialogue - made a guest appearance in July 2006 at the Teatro Colón Buenos Aires, the Goethe-Institut and the Teatro Margarita Xirgu with concerts, public rehearsals and lectures. His last concert appearance in Argentina had previously been in the 1970s. It began with his piece Eine Brise, fleeting Aktion für 111 cyclists , who first passed the theater “trilling, trilling”. Although he remained Argentine, the music critic sees Mauricio Kagel there as a “German composer”.

At the invitation of Walter Fink , he was the second composer in the annual composer portrait of the Rheingau Music Festival in 1991 .

In the 2006/2007 season, Mauricio Kagel was “Artist in Residence” at the Philharmonie Essen , where he also performed as a conductor. In the same year he was composer in residence at the Rostock University of Music and Theater . At a symposium in June 2007 at the University of Siegen , he received an honorary doctorate in philosophy. Mauricio Kagel lived in Cologne until his death .

Kagel is considered to be the most important representative of "instrumental theater", a kind of ritualized concert act, in which the visible side effects of making music (facial expressions, gestures, actions) are also included. An impressive example of his music theater works is the 1971 in the Hamburg State Opera premiered works State Theater , which will be listed because of threatening letters under police protection needed. Kagel himself developed his own instruments and playing techniques, for example for the film two-man orchestra or the instrumental theater Exotica . The scores are sometimes funny and original and consequently turn not only the expectations of the performers but also the listeners upside down. Theatricality and visible music also always play a major role in works for the concert hall . In the concert piece for timpani and orchestra , the soloist falls headlong into his instrument at the end. Other works include everyday objects (acustica) and noises. The use of electronics and tape playback, but also references to traditional music, were a matter of course for the cosmos of Kagel's music. Some of the explanations in the work are included in his filmic realizations. Kagel's work is often and in many ways interspersed with humor. He is interested in breaking through the fourth wall .

“Only people who have a sense of humor are relentlessly serious. But that has many facets. "

The Winter & Winter label , which has been releasing works by Mauricio Kagel since 1998, published an edition consisting of two CDs and a DVD on the occasion of his 75th birthday, on which Mauricio Kagel reworked or remastered his own works. These revisions include the pieces of music Pandorasbox , Bandoneonpiece , Tango Alemán , Bestiarium , the radio play A recording state and the film Ludwig van .