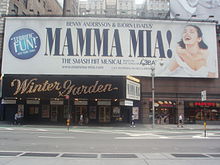 Advertisement for a musical on Broadway New York , 2010

Music theater (also: musical theater ) is one of the four classic branches of theater - the others are spoken theater ( drama ), puppet theater and dance theater ( ballet ). It arises from the genre of opera . Mixed forms are also possible. Music theater includes all forms that combine dramatic action (expressed in movement and language) with music (usually so-called classical music).

In the German-speaking area, music theater includes - in addition to some special forms - opera , operetta , cabaret- tinged singspiel and musical . All four genres, which emerged in the order of this list, are a good two millennia younger than the spoken theater that emerged in antiquity, on the basis of which (material and representational) they developed.

From mixed forms, in which the drama or music only serve to illustrate the other, genres developed from the Renaissance onwards, which relied on a harmonious integration of logos and mimus . Whether the music should still dictate the text, or, on the contrary, the music should obey the poetry, was a point of contention for a long time, on which the camps split. In the 20th century, people also experimented with forms that placed drama and music rather unconnected, associative side by side.

All instruments of the classical orchestra and of course the human voice can belong to a musical theater. In the 20th and 21st centuries, the instruments used in musical theater were expanded to include instruments from pop and jazz music (electric guitar, keyboards, synthesizers, electric bass, etc.). Recently there has been an increasing number of mixed media productions in which digitized music and music played live are mixed.

The term music theater itself was first coined in the 20th century, when people were critical of conventional opera (in which music dominated) and its performance practice and were bothered by the inadequacy of the term “opera” for the variety of forms that have now emerged .

Initially, the new term referred to experimental mixed forms, but in the course of time it was used more and more as a synonym for opera staged with modern means. Related to this is the increasing recognition of the director since the previous century as a responsible and artistically active role alongside author and composer, actors and singers, conductor and stage designer. The director Walter Felsenstein , who advocated equal communication of music and text and whose productions were considered exemplary for a long time, contributed significantly to the spread of the new term. Oscar Fritz Schuh , Günther Rennert and Götz Friedrich , for example, are named after him .

The composer Mauricio Kagel coined the term "new music theater" for forms of music theater that are differentiated from opera, operetta and musicals . The new music theater is not focused on the singing, but is based on the sound that is put into action on the stage. The actors act musically as well as dancing and performing.

In the Anglo-American language area, “musical theater” is not understood as a generic term for all of the above-mentioned forms, but rather used as a synonym for the musical and other rather light forms, in contrast to the traditional opera “opera”.

Portal: Theater  - Overview of Wikipedia content on the topic of theater