The Rheingau Musik Festival is one of the largest music festivals in Europe and was founded in 1987 by Michael Herrmann , who is still the festival's artistic director and managing director and in this role also acts for the PRO ARTE Frankfurt Concert Directorate and Wiesbaden Musik. The largest privately financed music festival in Europe organizes over 150 concerts annually in the region from Frankfurt via Wiesbaden to the Middle Rhine Valley . Venues are cultural monuments like Kloster Eberbach , Schloss Johannisberg , Schloss Vollrads and the Kurhaus Wiesbaden , wineries and historic churches. Every summer there are events by young artists and stars of the international music scene from classical to jazz to cabaret , musical-literary programs and world music . 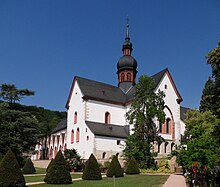 Michael Herrmann , the director of the Rheingau Music Festival, had the vision of a festival in his home country as early as the early 1970s, when he sang in choir concerts in the Eberbach monastery . After a trial run in the summer of 1987 with two concerts in Kloster Eberbach, founded Michael Herrmann with the two entrepreneurs Claus Wisser and Walter Fink on 23 November 1987 in the Eagle Tower in Rudesheim Music Festival e the "Rheingau. V. ". That was the hour of birth of the Rheingau Music Festival. Michael Herrmann also managed to win Tatiana Fürstin von Metternich-Winneburg for his festival project.

On June 23, 1988 the starting shot was given for the first official season of the Rheingau Music Festival with 19 events at a total of seven venues, the opening concert took place in Eberbach Monastery . Although well received by the public, the first year was a financial failure. The board of the Rheingau Musik Festival e. V. was still convinced of the project and decided to carry over the loss into the next year. In the second year, the program was increased to 25 concerts and a glamorous venue was added - Johannisberg Castle , which is still a fixture in the festival calendar today.

The great success that the festival was able to record in the first few years led to a rapid expansion - 19 concerts became over 150, 7 venues became over 40, the festival budget rose to 8 million thanks to the commitment of over 150 sponsors DM increased, a one-man operation became a medium-sized company with 19 permanent employees, volunteers, numerous seasonal workers and service providers.

The RMF is mainly financed privately, the public funding is 0.31%. With their multi-year commitment, sponsors take on around half of the financing, while the other half is borne by the proceeds from the tickets.

Kurpark Wiesbaden , in the background the Kurhaus with dome

The main focus of the festival is on classical concerts in their full range from symphonies, choral works, oratorios and masses, chamber music, recitals and piano recitals as well as comprehensive concerts of all genres. Every year, different focus topics and musical projects revolve around a special motto, as do annual focus artists from classical and jazz. Specially developed concert formats such as the Mozart Night, the Summer Festival, the Castle Festival, the Steinberger Round Table and the traveling musicians in wineries are annual festival classics and are constantly being expanded to include new festival-specific formats. With concert formats such as “Classic Marathon”, “Young Master Pianists of the Russian School” and “Next Generation”, young musicians receive a podium and are supported in their musical development. In the concerts of "Expedition Sound", the Rheingau Music Festival is dedicated to musical border crossers who renounce every category and float between genres.

Offers for families and children

At the children's and seat cushion concerts, children make themselves comfortable on seat cushions and experience the artists up close.

Numerous festivals and concerts for the whole family take place in the open air.

When visiting school there are personal encounters with top-class soloists and ensembles. The musicians come directly into the classrooms and show their skills, talk about their everyday lives and answer questions from the audience. School visits often take place in cooperation with “Rhapsody in School”.

As part of the long-term education project Rheingau Music LAB , the Rheingau Music Festival offers workshops in the areas of music and management, in which young people of different ages can become active themselves over a period of six months. You will get an insight into the conception, organization and implementation of a concert event and will be supported by professionals in the respective field.

The Rheingau Music Festival is characterized by extraordinary venues. The main venues include the cultural monuments Kloster Eberbach , Schloss Johannisberg and Schloss Vollrads as well as the Kurhaus Wiesbaden . Venues are also wineries and historic churches, as well as the Wiesbaden slaughterhouse , the Alte Lokhalle Mainz, the Kap Europa congress center, the RheinMain CongressCenter or the Ingelheim kING culture and congress hall. Open-air events take place in the cloister of Eberbach Monastery, on the floating stage of Vollrads Castle, in the Cuvéehof of Johannisberg Castle , the Wiesbaden spa gardens and the Domplatz in Geisenheim .

The Rheingau Music Prize has been awarded to renowned artists, composers and musicologists or musical institutions since 1994 in recognition of their overall musical work. In individual cases, the prize is also awarded as a scholarship to young musicians who are eligible for funding. The award initiated by the Rheingau Music Festival is endowed with 10,000 euros.

The prize, which has been donated annually by the Hessian lottery company Lotto Hessen GmbH since 2009, is endowed with 15,000 euros and is awarded to an exceptional young talent at the Rheingau Music Festival.

From 1990 to 2012, the Rheingau Music Festival annually presented a composer who expressed himself in a discussion concert and was also involved in the performance of some of his compositions.

The series of composer portraits was continued in 2013 as “Composer & Artist in Residence”.

As an artist in residence, an artist is the central face of the festival summer every season. They bring musical companions with them to the Rheingau and create unique concert moments.

In order to offer the jazz genre its own platform every summer, the “Focus Jazz” series was introduced in 2015, in which not only individual artists perform, but also formations such as B. the piano trio.