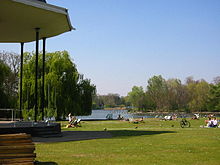 The Regent's Park (officially The Regent's Park ) is one of the royal parks in London . It is located in the northern part of the city center in the boroughs of City of Westminster and Camden . In the north there is the posh Primrose Hill district with its park.

The two square kilometer park is surrounded by a ring road, the Outer Circle ; in the middle there is an inner ring road, the Inner Circle . The latter surrounds Queen Mary's Gardens , the most carefully manicured part of the park. Apart from the rings and two connecting streets in between, the park is reserved for pedestrians. The southern, eastern and most of the park boundary are of white, with stucco decorated terraced houses ( English stucco terraces lined), the early 19th century by architect John Nash designed. To the north, the park is bounded by Regent's Canal , which connects the Grand Union Canal with the Docklands .

Regent's Park essentially consists of lawns with numerous recreational facilities, including a lake with row boats and numerous water birds, a colony with herons , sports facilities and children's playgrounds. At the north end of the park is the London Zoo . There are numerous public gardens, including Queen Mary's Gardens with an open air stage within the Inner Circle , a formal Italian garden with adjoining informal English gardens in the southeast corner, and the gardens at St John's Lodge . Winfield House , the residence of the US Ambassador , is on private property on the west side. Immediately next to it is the London Central Mosque , the largest mosque in the city.

On the outside of the Inner Circle is Regent's College , which is home to numerous higher education institutions, including Regent's Business School London , the European Business School and the British-American College London .

The land formerly known as Marylebone Park was bought by King Henry VIII . The site was a royal domain until 1646 when it was loaned to the Dukes of Portland as a hunting area. When the fiefdom expired in 1811, the Prince Regent (later King George IV ) commissioned the architect John Nash to create a design plan for the site.

Nash had planned a palace for the Prince Regent and some stately homes for his friends. But when construction work was due to begin in 1818, the Prince Regent had Buckingham Palace built instead . Shortly afterwards the park was opened to the public. Most of the row houses around the park were built anyway. Regent's Park was part of a large urban expansion zone that ran from St. James' Park in the south to Parliament Hill in the north, a hill in Hampstead Heath .

During the 2012 Summer Olympics and the 2012 Summer Paralympics , the start and finish area for road cycling competitions was to be set up on the park grounds . Temporary grandstands for 3000 spectators were planned. However, the plans were discarded: the street races were held in central London on The Mall , the individual time trials took place on the streets around Hampton Court Palace . Two provisional stadiums for baseball and softball were also planned in Regent's Park , but the IOC removed these sports from the Olympic program on July 8, 2005.