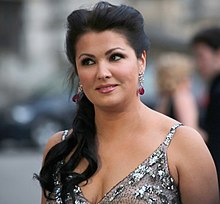 Career as a singer

Anna Netrebko completed her vocal studies at the Rimsky-Korsakov Conservatory in Saint Petersburg . After winning the Glinka singing competition in Moscow in 1993, she was engaged by the Mariinsky Theater in Saint Petersburg in 1994 . There she made her debut in the same year as Susanna in Mozart's Le nozze di Figaro . This production then made a guest appearance on August 6, 1994 at the Schleswig-Holstein Music Festival (director: Justus Frantz ) in Stade , where Netrebko's German debut took place. In 1995 the Mariinsky Theater gave a guest appearance in San Francisco under the direction of Valery Gergiev . Netrebko sang Lyudmila in Glinkas Ruslan and Lyudmila . After the excellent reviews of this guest performance, her steep career began on the international opera stages .

Netrebko soon afterwards sang at the most important opera houses in the world, for example at the Metropolitan Opera in New York and at the Vienna State Opera , especially as Donna Anna in Mozart's Don Giovanni or as Adina in Gaetano Donizetti's L'elisir d'amore . Since 1998 she has appeared regularly at the Salzburg Festival , where she celebrated her final international breakthrough in 2002 as Donna Anna in Don Giovanni under the conductor Nikolaus Harnoncourt . In the same year she made her debut at the Met as Natascha in the opera War and Peace by Sergei Prokofiev .

In 2003 Anna Netrebko sang the role of Gilda in Verdi's Rigoletto at the Bavarian State Opera in Munich , the title role in Donizetti's Lucia di Lammermoor at the Los Angeles Opera and again as Donna Anna at the London Royal Opera House .

After she had already made some sound recordings, the DVD The Woman, The Voice was released in 2004 with MTV- like videos that made Netrebko a pop star on the opera scene. Nevertheless, she does not make any crossover compromises and only sings classical music. The hype around Netrebko at the time, which was often no longer just about artistic achievement, was commented negatively by numerous critics, in particular the German "vocal pope" Jürgen Kesting (author of the four-volume work Die Große Sänger ).

2005 Netrebko both the Juliette sang in the acclaimed production Romeo et Juliette by Charles Gounod (with Rolando Villazón as Romeo) and the role of Adina in L'elisir d'amore by Donizetti. In the same year she took on the title role of Violetta Valéry in Verdi's La traviata (conductor: Carlo Rizzi ) with Rolando Villazón in the role of Alfredo Germont and Thomas Hampson as father Germont at the Salzburg Festival . The production was enthusiastically received by both critics and viewers, also because of a TV broadcast that is still very popular today. In 2005, Netrebko also completed a Japan tour with a recital for the first time .

In 2006 Netrebko sang in Donizetti's Don Pasquale at the New York Metropolitan Opera under the direction of Otto Schenk and the musical direction of Maurizio Benini (with Juan Diego Flórez and Simone Alberghini ). On July 7, 2006, two days before the final of the 2006 World Cup in Berlin , she gave a concert with Plácido Domingo and Rolando Villazón in the tradition of the three tenor concerts , which ended the World Cup from 1990 to 1998 had gone. The concert was broadcast worldwide and was considered the most-watched classical concert to date. In July and August 2006 Netrebko appeared at the Salzburg Festival as Susanna in the new production of Mozart's Le nozze di Figaro , conducted by Nikolaus Harnoncourt , with which the newly built house for Mozart was opened on July 26th (also broadcast on ORF and ARD ) . In November 2006 Anna Netrebko made her role debut as Amina in Vincenzo Bellini's bel canto opera La sonnambula at the Vienna State Opera.

In March 2007 Netrebko appeared at the Vienna State Opera in the new production of Jules Massenets Manon under the conductor Bertrand de Billy and the director Andrei Şerban , which was broadcast live on Austrian television ORF. Since April 2007 Netrebko sang the same role at the Berlin State Opera . This was a co-production with the Los Angeles Opera, with Rolando Villazón as Chevalier des Grieux.

Anna Netrebko caused a stir in the summer of 2007 when she canceled her engagement at the Salzburg Festival at short notice due to vocal cord problems and triggered a discussion about the "resilience of opera stars" by not appearing. At the Last Night of the Proms on September 8, 2007 in London's Royal Albert Hall , however, she presented herself again with the usual vocal security. This was followed in November 2007 by a series of three performances of the La Traviata opera at the Deutsche Oper Berlin. In 2008 she played and sang together with Rolando Villazón as Rodolfo in La Bohème by Giacomo Puccini .

Continuation of the career from 2009

After her pregnancy and subsequent time off, Netrebko returned to the stage on January 14, 2009 in the St. Petersburg Mariinsky Theater in the lead role of the Donizetti opera Lucia di Lammermoor . At the end of November 2009 Anna Netrebko's first "Best Of" album was released, on which selected arias and duets with partners Elīna Garanča , Rolando Villazón and Thomas Quasthoff can be heard. In 2009 she sang at the Metropolitan Opera in New York in the production of Bartlett Shers in the role of Antonia in Jacques Offenbach's Tales of Hoffmann .

In April 2011 Anna Netrebko sang the title role in Gaetano Donizetti's opera Anna Bolena for the first time at the Vienna State Opera under the conductor Evelino Pidò . The performance on April 5, 2011 was broadcast live in arte . On August 1, 2012, Netrebko appeared again in Giacomo Puccini's La Bohème as part of the Salzburg Festival , this time with Piotr Beczała as Rodolfo. The opera was broadcast on ORF on the same day.

On November 29, 2013 Netrebko made her role debut as Leonora in the opera Il trovatore by Giuseppe Verdi , with Plácido Domingo as Count Luna at the German State Opera in Berlin . In this role, the artist also triumphed in August 2014 in the Salzburg Festival production of Alvis Hermanis , again alongside Plácido Domingo, now with Francesco Meli as Manrico and Marie-Nicole Lemieux as Azucena. In 2015 she appeared at Scala in Verdi's Giovanna d'Arco in the title role (Johanna). Under the musical direction of Christian Thielemann , Anna Netrebko made her role debut as Elsa in Wagner's Lohengrin at the Semperoper Dresden in May 2016 .

In 2017, Netrebko made further debuts in various roles. In June she sang the lead role in Francesco Cilea's Adriana Lecouvreur for the first time on the stage of the Mariinsky Theater . In July, Netrebko sang the title role in Aida by Giuseppe Verdi at the Salzburg Festival under the baton of Riccardo Muti . In December 2017 she took on the part of Maddalena in Umberto Giordano's Andrea Chénier on the stage of La Scala in Milan .

In April 2018 Netrebko appeared for the first time as Floria Tosca in the highly dramatic Puccini opera Tosca at the New York Metropolitan Opera . On May 31, 2018 she gave a concert in the park of Schönbrunn Palace in Vienna .

She took on the role of Adriana Lecouvreur again at the Salzburg Festival in 2019, where Cilea's opera was performed in concert. The Neue Zürcher Zeitung certified that Netrebko had phenomenal voice control in the first of three performances. The newspaper described Netrebko as "probably the only remaining prima donna assoluta of our time" and noted that she was "the diva of the festival, who embodied the diva of the Comédie-Française of the 18th century". However, Netrebko was indisposed on the day of the second performance in Salzburg, so that the Chinese He Hui had to step in for her . In the planned third performance of the opera by Cilea, Netrebko appeared again. At the beginning of 2019, Netrebko played the Lecouvreur at the Metropolitan Opera in New York, together with the Polish tenor Piotr Beczała as Moritz von Sachsen, with the performance on January 12, 2019 from the Met in the cinemas from approx. 70 countries around the world was broadcast.

Anna Netrebko is the daughter of an engineer and a geologist . In the early summer of 2007, she separated from her previous partner, the Italian baritone Simone Alberghini . From 2007 to 2013 Netrebko was in a relationship with the Uruguayan bass-baritone Erwin Schrott . The two have a son (* 2008).

At the end of 2013, Netrebko stated in an interview on the Russian TV show “Pust govorjat” (“Let them talk”) that their son had been diagnosed with a mild form of autism .

On July 10, 2014, Netrebko announced her engagement to Azerbaijani tenor Yusif Eyvazov on her Facebook page . The two had met in March of the same year while rehearsing for the performance of Manon Lescaut in Rome. On December 29, 2015, Anna Netrebko and Yusif Eyvazov married in Vienna . The civil wedding took place in the Palais Coburg , the subsequent celebration in the Palais Liechtenstein .

After Netrebko applied for Austrian citizenship in Vienna in March 2006, the Austrian Federal Government decided on her naturalization in the Council of Ministers on July 25, 2006 , although she neither speaks German nor lives in Austria . Previously, Netrebko was occasionally referred to as "characterless" and "traitor" in her home country. However, she referred to the rigorous visa regulations for Russian citizens, which made it impossible for her to be fully active internationally as an artist. She wants to keep the Russian citizenship: "Of course I am and will remain Russian."

On August 1, 2006, Netrebko was officially granted Austrian citizenship in Salzburg .

Prior to the 2012 presidential election in Russia , Netrebko was one of 500 people to sign a petition for Vladimir Vladimirovich Putin to return to office .

On December 7, 2014, Netrebko had himself photographed together with the separatist leader Oleh Zarjow in front of the flag of the internationally unrecognized state of New Russia . On the occasion, she promoted the preservation of the opera theater in Donetsk , for which she presented Zaryov with a check for one million rubles (equivalent to about 15,000 euros at the time  ). Because of the war in eastern Ukraine and the fact that Zaryov was on the EU's sanctions list, the performance attracted a great deal of attention. The Austrian Foreign Ministry expressed itself negatively and sharply criticized the appearance. Although the advertising contract between Netrebko and Austrian Airlines expired on November 30, 2014, the company has asked Anna Netrebko's management for an explanation about possible legal action.