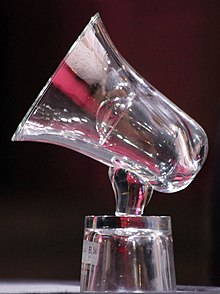 The Amadeus Austrian Music Award is the largest Austrian music award . It has been awarded annually in various categories to the most successful national musicians in Austria since 2000. The Amadeus Awards 2016 were presented for the 16th time on April 3, 2016, and the Vienna Volkstheater was the venue for the awarding for the fifth time . The last award ceremony took place on April 25, 2019. The ORF broadcast the show with a time delay.

The 20th presentation of the Amadeus Austrian Music Awards will take place in September 2020. Originally, this was scheduled for April 23, 2020, but due to the COVID-19 pandemic , the award was postponed.

The Amadeus Austrian Music Award was introduced by the Association of the Austrian Music Industry (IFPI Austria) , which also organizes the event. The music producer Mario Rossori was entrusted with organizing the award from 2000 to 2008. From 2000 to 2007 the TV show was broadcast on Austrian radio (ORF). The production was done by the company KIWI.TV ( Barbara Stöckl , Peter Nagy ), moderator was Andi Knoll . In 2008, the TV event was for the first time no longer organized with ORF, but with the private broadcaster Puls 4 / ProSiebenSat.1 Media ; FESCHFILM Entertainment took over the production and the award show was hosted by Michael Ostrowski from 2008 to 2010 . In 2012, the production of the show was taken over by betterimages. Actor and musician Manuel Rubey hosted the award show from 2012 to 2017, and has been supported by presenter Arabella Kiesbauer since 2015 . In 2015, the award ceremony was broadcast by ATV for the first time . Since 2017, the television broadcast of the award has again been hosted by ORF. In 2018 and 2019 Conchita took over the moderation.

The location of the award ceremony in 2008 was the event hall in Gasometer B and in 2009 the art hall in the MuseumsQuartier in Vienna . In 2010 the awards were presented in the Wiener Stadthalle . The award ceremony has been taking place in Vienna's Volkstheater since 2012 .

The Amadeus Award can be won by musicians who are Austrian citizens or who have their center of life in Austria. In 2016 it was awarded in 18 categories. In order to avoid duplication, the general genre-independent categories artist, artist and band were no longer awarded in addition, but only within the genre categories. In addition, hits and folk music were grouped together in one category.

Determination of the awards

In each category, the five artists / singles / albums were nominated that were sold most frequently in the last year according to the official Austrian sales hit parade Ö3 Austria Top 40 . A jury consisting of 400 people from the Austrian music and media industry selected the winners from these nominees. Exceptions were the Amadeus for Lifetime Achievement , which was determined solely by the jury, and the FM4 Alternative Act of the Year . For this, five artists / groups were initially nominated by a jury and the audience could vote on the winner on the Internet. The winners of the award in the individual categories are determined according to different criteria. The winner of the award for the life's work is selected by the organizer, the FM4 Award is determined by FM4 (nomination by FM4 editorial team, public voting).

The nominations in the categories band , artist , artist , album and song arise partly from the jury vote, and secondly from sales in the year preceding the award. For the latter criterion , the Austria Top 40 sales charts compiled by GfK Entertainment are used as the basis . Both ratings - jury and sales - each contribute 50% to the overall ranking. In the categories of band , artist and artist , the top 7 of this ranking are nominated, in the categories album and song the top 5. The winner is then chosen from the nominees by means of online audience and jury voting, with both votes 50% count.

The bestseller of the respective genre is directly nominated for the genre categories; there is no prior vote by the jury or the audience. Four further nominations per genre result from the artists chosen by the genre jury members. The winner will be chosen from these five nominees, with audience online voting and jury voting each accounting for 50%.

The nominations for the Live Act category (presented by oeticket.com ) are 50% based on the jury rating and 50% based on ticket sales in the previous year, whereby the artist must have performed at least three live performances that year. The five artists with the highest score in this ranking are put to the vote; As with most other categories, online audience voting and jury voting each count 50%.

This procedure for voting (50% audience online voting, 50% jury voting) also applies to the categories Best Video and Songwriter , although the respective specialist juries nominate five music videos or songwriters without considering another criterion. The winner of the songwriter award is determined in cooperation with AKM / austro mechana and the Austrian composers' association .

The best engineered album is determined by the professional association of the film and music industry in the Chamber of Commerce.