Arabella Kiesbauer at the Romy Awards 2016

Cosima Arabella-Asereba Kiesbauer , after marriage to Eblinger (born April 8, 1969 in Vienna ) is a German television presenter who grew up and lives in Austria . She became known with the talk show Arabella , which was broadcast on ProSieben from 1994 to 2004 .

Arabella Kiesbauer was born as the daughter of the German theater actress Hannelore Kiesbauer and the Ghanaian mechanical engineer Sammy Ammissah († 1999) and grew up with her grandmother in Vienna. After graduating from the Lycée Français de Vienne , she studied journalism and theater studies. She is a German citizen because of her maternal descent .

She began her television career as a presenter of the ORF youth show X-Large from 1987 to 1993. Since 1991 she has also worked for the German private broadcaster ProSieben (including the magazine Rund um Hollywood ), where she initially worked as an announcer, then from 1994 on with her workday Talk show Arabella was on. In the same year she also released a CD entitled Number One .

On June 9, 1995, as part of a racially motivated series of attacks, a letter bomb attack was carried out on her, in which an assistant was slightly injured. The perpetrator Franz Fuchs was later caught and committed suicide after being convicted. 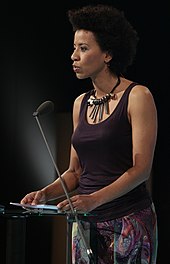 In July 1995 Kiesbauer could be seen on the cover and in the German edition of Playboy . In 2002 she presented the ORF casting show Starmania for the first time . After the discontinuation of the show Arabella in 2004, she was scheduled as a presenter for the new program Das Geständnis . However, due to differences with the broadcaster about the conceptual content, the two soon ended their collaboration.

Kiesbauer played an important role as a representative of the broadcast format of the "loud" afternoon talk show, which polarized the audience. First, she was awarded the Bavarian TV Prize for the unconventional talk show, which - instead of celebrities - had average people as guests ; but the show was later criticized as being level.

In Switzerland she is also known as a model for Vögele Shoes and as a jury member of Music Star .

After a seven-year relationship with Fred Schuler, Kiesbauer has been married to the Viennese personnel consultancy Florens Eblinger since November 2004. The couple has a daughter (* 2007) and a son (* 2010) and lives in Vienna. She took her husband's name and continues to appear in the media under Arabella Kiesbauer.

In 2012 Kiesbauer celebrated her TV comeback after a long break with a preliminary report on the Life Ball , in 2013 she was also back in action. She has also been moderating the Kiddy Contest on PULS 4 since October 2012 . Starting in May 2014, she presented the Austrian edition of the documentary soap Bauer sucht Frau on the Austrian broadcaster ATV from the eleventh season .

Kiesbauer moderated the three shows of the Eurovision Song Contest 2015 in the Wiener Stadthalle together with Mirjam Weichselbraun and Alice Tumler .

Kiesbauer is committed to the human rights organization Survival International and supports the campaign for the strongly threatened Awá people in Brazil .

Kiesbauer moderates the ESC 2015 in Vienna with her colleagues

She also starred in the film adaptation of the Hera Lind novel Das Superweib and appeared in an episode of Commissioner Rex . She worked as a moderator at company parties, charity and trade fair events.