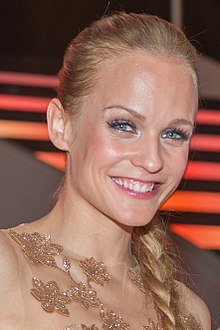 In 1998, Weichselbraun gained his first experience in the media industry while editing the Austrian regional radio station Antenne Tirol . She first became known when she was elected BRAVO Girl in 2000 . After working for the regional television broadcaster Tirol TV and briefly moderating the cultural program Das Magazin , she applied to the newly founded television broadcaster Viva Plus in 2001 , where Weichselbraun hosted the Cologne Day program for eight months until it was discontinued . She then moved to MTV Germany in Munich and later to Berlin, where she was the face of the Select MTV programs(until January 2005) and TRL (until April 2007).

In addition to his work at MTV, Weichselbraun presented an online magazine for ZDF from 2003 on Wetten, dass ..? -Show. Furthermore, from 2004 she was responsible for the live broadcasts of the ORF format Expedition Austria together with Christian Clerici , a year later the Austrian preliminary decision for the Eurovision Song Contest and the ORF broadcast Dancing Stars with Alfons Haider . For her moderation of Dancing Stars she was awarded a Golden Romy in 2006, 2008 , 2011 and 2012 .

In 2006, Weichselbraun became known to a wide audience in Germany as the presenter of the RTL show Dancing on Ice alongside Wayne Carpendale . She also acted as a presenter for the Life Ball (2007), Kiddy Contest (2007 and 2008) and the 2008 Romy Awards. In 2010 she hosted three programs in the series Die Hit-Giganten on Sat.1 with Roger Cicero .

In parallel to her work as a presenter, Weichselbraun also appeared as a spokesperson for Jan Drees ' radio play Last Days, now and as an actress. In 2007 she starred in the ORF television film Die Rosenkönigin and an episode of the ProSieben fairy tale hour ( Frau Holle - Hell is loose in heaven ). In 2008, the role of Sidney followed in the television film H3 - Halloween Horror Hostel , which was broadcast as part of the ProSieben Funny Movie series. In 2009 followed a role in Wolfgang Groos' feature film Hangtime - Not an easy game .

2009 Weichselbraun took over the role of Sugar Kane in Peter Stone's musical Some Like It Hot in the theater in the Josefstadt .

From September 2012 to March 2014 she was a changing sidekick in the Harald Schmidt Show on Sky .

From October to December 2012, Weichselbraun hosted a few episodes of the show Do you have nerves? (Austrian version of Do you understand fun? ) in ORF one , which was canceled after 9 episodes due to a lack of ratings.

Since March 2013 she has been a fixture in the dance show Dancing Stars for the eighth time ; Furthermore, she was also seen from March 2013 in the movie Zweisitzrakete .

Weichselbraun moderated the Austrian preliminary decision for the Eurovision Song Contest 2015 from February to March 2015 . She was also the presenter for the final shows in the Wiener Stadthalle with Alice Tumler and Arabella Kiesbauer .

In 2015 she was a participant in the VOX show Grill den Henssler .

Weichselbraun has a twin sister. The twins' parents married late, so each of the girls could choose their family name. Her sister Melanie Binder took over that of her father, Mirjam that of her mother. Binder is her sister's manager.

After a two-year relationship, Weichselbraun separated from the singer Marque in spring 2007 . She was with the Sat.1 breakfast television presenter January Hahn dating, but broke up after four years of relationship in September 2011 from him. Since 2013 she has been in a relationship with Ben Mawson, the manager of Lana Del Rey . On May 10, 2013, she announced live on Dancing Stars that he was expecting a baby. Their daughter was born on September 28, 2013 in Tyrol , but they live in the London district of Islington . 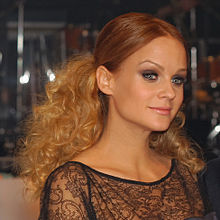 Sistula brown with the Romy 2012