Morten Harket (born September 14, 1959 in Kongsberg ) is a Norwegian musician , singer and composer . He is best known as the singer and front man of the pop band a-ha , but has also released several successful solo albums.

Harket grew up with three brothers and a sister in Gullhella, Asker . Together with Magne Furuholmen and Pål Waaktaar-Savoy , he formed the group a-ha from 1982 , which was successfully represented in the charts from mid-1985. Before joining a-ha, he performed briefly with the blues band Souldier Blue.

In 1988 and 1989, Harket played the role of Christoffer in the films Kamilla and the Thief and Kamilla and her boyfriend .

As a solo artist, he won all four possible prizes of the Norwegian Spellemann Prize for the first time in 1995 with the album Wild Seed and the single A Kind of Christmas Card . Among them was the Årets spellemann hiking trophy , which is the only one of the prizes not to be selected by a jury of experts, but by the Spellemann committee itself. In addition to the sale of records , importance is also attached to the overall appearance of an artist. Harket won the other three prizes for Best Male Artist, for Album of the Year and Song of the Year - the latter together with the songwriter Håvard Rem , with whom he had already worked a lot as a solo artist. In addition, with a-ha he won another seven Spellemann prizes in 1985, 1986 and 1990, making him the most successful artist at these awards with a total of eleven prizes.

In 1993 he recorded a cover version of Can't Take My Eyes Off You for the Coneheads soundtrack .

On May 18, 1996 he moderated the 41st Eurovision Song Contest 1996 in Oslo together with journalist Ingvild Bryn .

The solo album Letter from Egypt was released on May 30, 2008. The first single on the album was released in mid-November 2007 and is entitled Movies . In mid-May 2008, the second single Darkspace - You're with Me came out.

On October 15, 2009, a-ha announced the temporary end of the band for the end of 2010. Harket decided a little later to record a solo album. In the fall of 2011, he wrote with Joakim Berg and Martin Sköld at Out of My Hands . The work was published on April 13, 2012. In spring 2015, a-ha announced the reunion and a new studio album entitled Cast in Steel .

In 2012, Harket and his colleagues from a-ha received the Saint Olav Order of Knight 1st Class for their contribution to Norwegian music.

In September 2013 Morten Harket was a guest singer in the MTV Unplugged project of the Scorpions in the Lykabettus Theater in Athens and sang with Klaus Meine Wind of Change .

In 2016 his autobiography entitled My Take On Me was published in German. This covers the first 31 years of his life and is about his childhood, his musical beginnings and his time with a-ha up to the Rock in Rio concert in 1991. In it, Harket describes, among other things, how he was bullied as a child for years in school. In 2015 he had already participated in a meeting on the subject of bullying organized by the Norwegian Prime Minister Erna Solberg .

In 2017 he acted as a mentor on the fourth season of the Norwegian edition of The Voice . In the fifth season he was there again as a mentor.

The sound engineer who worked on a-has Take On Me , Gerry Kitchingham, describes Morten as an excellent singer with an incredibly strong falsetto and a voice with an almost choirboy-like clarity. Producer Alan Tarney adds that Morten has an exceptional voice with a rather impressive range, a very expressive way of singing and that his voice is very versatile.

A-ha's guitarist Paul Waaktaar-Savoy describes Morten's voice as unique. He said: “In the transition from normal to falsetto, where others simply fail, Morten has incredible power in his voice. ... Morten can give his voice any direction, and his talent for changing expressions has given us the opportunity to experiment. "Keyboardist Magne Furuholmen says:" Morten has an impressive voice and manages to bring feelings to people. You want to hear him because of his voice. You might listen to other artists despite their voices. " 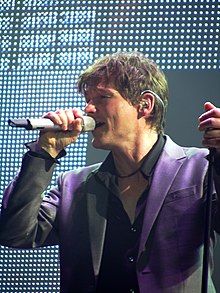 From 1989 to 1998, Harket was married to the Swedish model Camilla Malmquist. This marriage produced three children, including the musician Tomine Harket .

Until the end of 2004 he lived with the Norwegian athlete Anne Mette Undlien, who gave birth to a daughter in 2003.

He has been in a relationship with Inez Andersson, his long-time assistant, since mid-2005. Andersson brought a son into the relationship. In September 2008 a daughter was born.

A rare species of orchid found in Rwanda in 2007 , Liparis harketii , was named after Morten Harket. Harket has been an orchid lover since childhood.

For his publications with a-ha see: A-ha / discography