Refaeli was born into a secular Jewish family. Her grandparents are from Lithuania , Italy and Poland . Her mother, Tzipi Levine, was already a successful model.

She grew up on her parents' horse ranch in Hod Hasharon. At the age of eight months she was the first to act as a model for advertising and photo shoots. Since she had to wear braces as a twelve-year-old , she stopped doing this for three years.

In 2003, at the age of 18, Refaeli married an older family friend. As a result, she avoided the two-year military service , which is mandatory for women in Israel , from which married people are exempt. A little later the marriage was divorced again. She later dated the American actor Leonardo DiCaprio for five years . In 2015 she married businessman Adi Ezra , the head of Neto ME Holdings Ltd , a food importer. With him she has two daughters and a son. 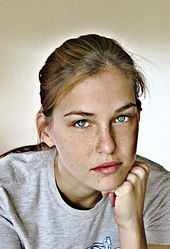 Bar Refaeli at the age of 18

After her 15th birthday, Refaeli posed for fashion magazines and appeared in a television commercial. In 2000 and 2001 she won a beauty pageant twice in a row, which she named "Model of the Year". From then on, her career took off and she worked as a front model for the line of a fashion label in 2002 and 2003. Outside of Israel, too, their reputation grew; she graced the cover of French Elle four times in two months and posed for the Victoria's Secret catalog. Then there was the front page of the Italian edition of GQ magazine . She photographed the Sports Illustrated Swimsuit Issue for each issue from 2007 to 2010 and 2012, and in 2009 she graced the cover. In addition, she worked as a star model for Otto-Versand at the beginning of 2008 . The British men's magazine Arena voted Bar Refaeli “Body of the Year 2008”. In 2012, the American men's magazine Maxim voted her “the most beautiful woman in the world”.

2012 Refaeli was on the jury of the Sat.1 - Model casting show one million US dollars shooting star .

On January 26, 2019, her participation as a presenter at the Eurovision Song Contest 2019 in Tel Aviv was announced. The competition took place on May 18, 2019. Refaeli moderated alongside Erez Tal , Assi Azar and Lucy Ayoub .

Controversy and conviction for tax evasion

In autumn 2007 she caused a sensation through an interview with the daily Jedi'ot Acharonot , which was published under the headline "Bar Refaeli versus the State of Israel". She was quoted as saying, “Why is it good to die for our country? Isn't it better to live in New York? ”So she doesn't regret not having done her military service. Refaeli sued the newspaper because it was misrepresented in the interview.

Her refusal to do military service resulted in an Israeli general calling for a boycott of products she was promoting.

In 2013, the Israeli military criticized a PR campaign by the Ministry of Foreign Affairs aimed at improving the country's image and involved in Bar Refaeli.

In autumn 2018, an advertising campaign with Refaeli caused a sensation, in which the removal of the niqab was presented as an act of liberation.

In May 2019, the Israeli tax authorities decided that Refaeli had to pay the equivalent of 2 million euros in taxes to the Israeli state. In addition, she must bear the costs of the proceedings against her. Refaeli had not fully disclosed her merits in Israel and abroad. The court ruled that Refaeli had - contrary to what she herself stated - had the center of her life in Israel in the disputed tax years since 2009. In July 2020, she and her mother were found guilty of tax evasion in Israel ; both confessed. Refaeli was given nine months of social service while her mother, as her manager, was sentenced to 16 months in prison. In addition to the additional payment, there was a fine of 1.3 million euros. Bar Refaeli's assets are said to be 126 million euros, and that of her husband 400 million euros.