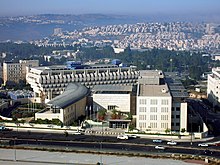 Image of the headquarters in Givat Ram (Jerusalem)

The Ministry of Foreign Affairs ( Hebrew משרד החוץ, Misrad HaChutz ) is responsible for Israel's foreign policy . It is also intended to build economic, cultural and scientific relationships with other countries.

Israel maintains its own embassies in 77 states, consulates general in 19 states and special missions in five other states . In association with the United Nations , Israel has four diplomatic missions and one to the European Union .

On March 29, 2017, diplomatic relations with Nicaragua were resumed, which were broken off in 2010.

The first state to recognize Israel was the United States , eleven minutes after it was founded.

The first ambassador was Golda Meir , who was accredited to the Union of Soviet Socialist Republics from June 1948 to January 1949 .

The ministry has existed since the constitution of the Provisional Government on April 12, 1948. The first foreign minister was Moshe Sharet , who has assumed this function in eight successive governments. Golda Meir was the minister with the longest term (June 18, 1956 to January 12, 1966).

Ministries of the State of Israel