Jaguar XJ (Mark I) refers to the first generation of British upper class - sedan Jaguar XJ . Introduced in 1968, the type 1973 with the Series II and Series III 1979 with each of a facelift undergone and built up the 1,992th

The Jaguar XJ was the last design by William Lyons , founder of the Jaguar company . At the Mondial de l'Automobile in Paris on September 26, 1968, the XJ 6 with a six-cylinder in - line engine and 2.8 and 4.2 liters displacement was presented. The long-awaited XJ 12 with the 5.3-liter twelve-cylinder - V engine of the E-Type came in 1972 added, and worked for 15 years until the appearance of the BMW 750i , the only four-door passenger car model with twelve-cylinder engine in the German market.

The Series II, presented in 1973, differed from its predecessor in the higher front bumper , the newly designed body in the area of ​​the bulkhead and the completely new heating and ventilation system, with automatic air conditioning in the XJ 12. The XJ 12 received the electronic manifold injection D-Jetronic in 1975 . The two-door coupés XJ 4.2 C and XJ 5.3 C enriched the model range until 1977. The Series III from 1979 was characterized by a redesigned roof line, rubber-reinforced bumpers, new doors with hinged door handles and an intake manifold injection for the 4.2 liter engine as well. Of these three series, a total of over 400,000 copies were made between 1968 and 1992. The designations XJ 6 and XJ 12 were retained for the successors with the internal codes XJ40, XJ81 , X300 and X330 . The abbreviation XJ was also part of the name of the subsequent model series X308 and X350 .

The XJ 6 had either the well-known XK six-cylinder in-line engine with 4.2 liters displacement or a new version of this engine with a shorter stroke and 2.8 liters displacement. As with the 420, two carburettors were provided so that an output of 245 or 180 bhp was realistic. For the first time Jaguar also specified the output according to the DIN standard: 186 and 149 hp (136/109 kW). The top speed was 205 km / h (4.2 l with manual gearbox and overdrive) or 180 km / h (2.8 l with manual gearbox and overdrive). The rear wheels were driven via a four-speed manual transmission - optionally with an electrically switchable overdrive from Laycock-de Normanville - or, if required, via a three-speed Borg-Warner 35 automatic transmission . A limited slip differential was available as an option on the 4.2 liter; in some countries (e.g. Switzerland) it was standard equipment. The construction of the rear independent suspension on double wishbones with additional trailing arms came from the E-Type. Its subframe was softly mounted in rubber, which, together with the trailing arms, resulted in passive steering of the rear axle and reduced oversteering of the car. The hydraulic brake system with two brake circuits worked with three-piston brake calipers from Girling at the front, the rear disc brakes were internal (on the differential) and combined with small brake drums for the parking brake. Dunlop had specially developed a new radial tire for the XJ 6, the SP Sport in size E70 VR 15 (corresponds to size 205 / 70VR15).

A simple version of the 2.8 liter was initially listed in the brochures without steering servo and without center armrest between the front seats (but probably no such vehicle was actually delivered) as well as another with the designation de Luxe , whose equipment corresponded to the 4.2.

In autumn 1969 Jaguar presented the Daimler versions of the XJ 6 called Sovereign 2.8 and Sovereign 4.2, which replaced both the Daimler 250 V8 and the former Daimler Sovereign. Shortly before, the production of the Jaguar 240 had been stopped. When production of the 420 G also ended in 1970 , the XJ6 remained the only sedan series from Jaguar / Daimler (apart from the state body DS 420).

In 1972 the XJ 12 was added with the sister model Daimler Double-Six. Double-Six was already the name of the first twelve-cylinder engine from Daimler in the late 1920s. The XJ 12 and Double-Six had the same 5.3-liter twelve-cylinder and internally ventilated front brake discs as the E-Type V12 . The engine output was given as 269 DIN PS (198 kW). Just one month later, the particularly luxuriously equipped Daimler Double-Six Vanden Plas with a longer wheelbase premiered. The versions XJ 6 4.2, Daimler Sovereign 4.2 and Jaguar XJ 12 L were also available on the domestic market from autumn 1972 with the longer wheelbase.

98,343 of the Series I were made until the Series II was introduced in 1973 due to new American regulations that made a higher-mounted front bumper mandatory.

In September 1973 the XJ-Series II was presented at the IAA in Frankfurt am Main , which was available as a four-door sedan with both a short and a long wheelbase. A two-door version was added later, which was only offered for a short time and was also used temporarily in motorsport.

The following variants of the Series II sedan were available:

The 4.2-liter engine now only made 172 DIN HP due to reduced compression, in contrast to the early Series I with 186 DIN HP (126 instead of 136 kW). Overdrive became standard equipment in the course of more and more versions .

In autumn 1974, the production of sedans with short wheelbase was stopped. Instead, there was the Daimler Vanden Plas 4.2 with automatic gearshift as a particularly luxurious version of the Sovereign LWB that was still being manufactured.

The output of the V12 was increased in the spring of 1975 with the introduction of D-Jetronic intake manifold injection , which Lucas had redesigned to meet the needs of a twelve-cylinder engine, from 253 to 287 DIN PS (from 186 to 211 kW). At the same time, a new 3.4-liter six-cylinder with 161 DIN PS (118 kW) was introduced as the XJ 3.4 and Daimler Sovereign 3.4 versions (both with a long wheelbase). The remaining Jaguar model names changed outside of the USA to XJ 4.2 and XJ 5.3.

Due to stricter emissions regulations in the USA, the 4.2 liter was offered there from May 1978 with fuel injection. A total of 91,227 Series II vehicles were built by February 1979; 14,226 of these vehicles were delivered with the twelve-cylinder engine.

Little is known that the Jaguar XJ6 and Jaguar XJ12 models were also assembled in South Africa by Jaguar Cars of South Africa from 1970 to 1981 . There it was given its own color palette. A model specially composed for the South Africans was the XJ6 Executive, which was a quasi “re-jaguarized” version of the Daimler Sovereign 4.2.

The new XJ Coupé had already been announced as the most attractive variant of the Series II at the IAA in 1973, but it was not until 1975 that it became known as

go into series production. The frameless side windows of this car, between which the B-pillars were completely omitted for reasons of appearance, of annoying wind noise, turned out to be a very difficult technical challenge. The production of the coupés was stopped in November 1977 - probably an attempt to revive the initially weak demand for the XJ-S sports coupé, which was only introduced in 1975 . Production of the Daimler Sovereign 3.4 was also ended during this time. A GM three-speed automatic transmission (Turbo-Hydramatic 400) has been installed in the twelve-cylinder engines since spring 1977.

The coachbuilding company Ladbroke-Avon in Warwick manufactured around a dozen convertibles based on the XJ-C from 1979 onwards and also offered conversion kits.

The XJ-C in motorsport

The two-door XJ-C was used in the factory in touring car racing in the second half of the 1970s . British Leyland commissioned the established tuning company Broadspeed to develop and manufacture specially revised cars. The vehicles were equipped with the 5.3 liter twelve-cylinder engine that used standard camshafts and tappets, but employed revised pistons. The maximum power was achieved at 8,000 revolutions per minute, the maximum torque at 5,750 revolutions. The power was transmitted via a manual gearbox with modified translations. The chassis, exhaust system and steering have also been adapted to racing needs. Broadspeed produced a total of four copies of the sports car. They were classified as Group 2 vehicles and were driven at various touring car events in 1976 and 1977 by Derek Bell , David Hobbs , Andy Rouse and Steve Thompson . The most notable result was achieved by Bell and Hobbs at the Tourist Trophy organized by the Royal Automobile Club at Silverstone in 1976, where they started the race from pole position and set the fastest lap times. However, they couldn't finish the race because their Jaguar retired prematurely with a puncture. 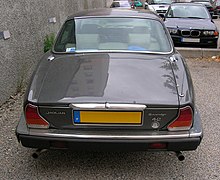 In March 1979, the third generation of the Jaguar XJ was presented in Scotland, which had been stylistically revised by Pininfarina . The Series III was recognizable by the larger window areas and the rubber-reinforced bumpers. In the 4.2, the carburettors have now generally been replaced by an injection system; it now developed 205 DIN PS instead of the last 168 DIN PS (151 instead of 124 kW).

While the Daimler versions had previously been produced almost exclusively for the British market, these were now also offered in continental Europe. The model range was as follows (all sedans on a long wheelbase):

In 1981 the V12 got a new cylinder head based on Fireball technology by the Swiss Michael May, which reduced consumption by around 2 liters (minimum 18 to 16) and was called HE (for High Efficiency). The power was now given as 295 DIN PS (217 kW). Due to the HE construction, the cylinder head had an unusual arrangement of the spark plugs (from the side). As a result, two spark plugs cannot be replaced without removing add-on parts. For this reason, these were and are often left out when switching. There was a five-speed manual transmission for the six-cylinder, but it was only available from around 1982.

In the autumn of 1982 the model range for continental Europe - with a redesigned center console - was fundamentally restructured, since the noble Daimler versions with their sales figures threatened to overtake the simpler Jaguar versions. The Daimler Sovereign became the Jaguar Sovereign 4.2, the Daimler Double Six became the Jaguar Sovereign HE and the Daimler Double Six Vanden Plas became the Jaguar Vanden Plas HE For Switzerland, a special version with further improved equipment was added to the XJ6 4.2, called the XJ6 Swiss. In America, where only the XJ6 (and in Canada also the XJ12) was available, a Jaguar Vanden Plas was added as a posh alternative. In the USA, where the XJ12 was not exported due to the penalty tax on vehicles with high fuel consumption, the latter was available in the 4.2 liter version, in Canada with the V12 engine.

At the end of 1985 Jaguar decided to replace the designation HE on all models with the more understandable designation "V12". In continental Europe the Jaguar Vanden Plas HE was now offered as Daimler Double Six. The area around the gearshift lever or selector lever on all models was given a wood veneer that was selected to match the dashboard instead of the previous black vinyl cover.

Production of the XJ6 ceased in 1986, with deliveries to the US continuing until early 1987. The successor could only be presented there in May 1987. The Series III with a V12 engine continued to be produced until 1992 (for the background, see XJ40 ). The XJ12 / Daimler Double Six was extensively revised again in 1989 for the 1990 model year and equipped with, among other things, a Bosch ABS and an exhaust gas cleaning system with a regulated catalytic converter (previously only available on request). With the end of the production year 1991 the production of the simpler V12, no longer provided with the nickname Sovereign, was stopped. The last Daimler Double Six of the Series III rolled off the production line on November 30, 1992 after a total of 177,668 copies. Overall, the XJ series brought it to 404,243 copies - more than any other Jaguar series before.

The Ladbroke-Avon body shop in Warwick produced a small series of a station wagon version of the XJ Series III or the Daimler parallel model from 1980.

Timeline of the XJ models