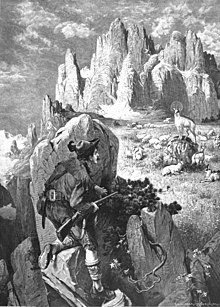 Zlatorog ( German : Goldhorn ) is a legendary figure from the Slovenian Alps .

The legend of the wild white chamois buck Zlatorog has its origins in the Triglav area. He had golden horns, owned a garden high up on the Triglav and was the keeper of a hidden treasure. When a greedy hunter tried to seize the treasure, he sneaked up to Zlatorog and shot him. From the blood of the slain chamois buck a miracle flower grew on the spot, which gave Zlatorog life back. In a rage, Zlatorog killed the culprit. Afterwards he destroyed his mountain garden and was never seen again.

Rudolf Baumbach made this legend the basis of his famous verse epic , which was published in 1877. The poet Camilla Lucerna turned the epic into a singspiel, for which her brother, the composer Eduard Lucerna , composed the music.

Today Zlatorog is the trademark of the Slovenian beer brand Laško .