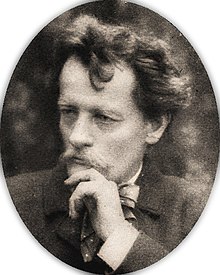 August Trinius (born July 31, 1851 in Schkeuditz , † April 2, 1919 in Waltershausen ) was a German writer . He was also known as a traveling writer. His greatest merit was that he triggered the Rennsteig boom of the Kaiser Wilhelm era with his book Der Rennstieg des Thüringer Waldes from 1890 onwards .

Heinrich August Trinius was the illegitimate son of Sidonie Alwine Trinius and moved with his mother and sister to Erfurt , where he grew up. Here he discovered his special love for Thuringia . After completing his school education, he completed an apprenticeship as a businessman . Following this, Trinius took a position as an accountant in Berlin . On the side he started to write and his first publications were published.

When the first journalistic successes emerged, Trinius devoted himself entirely to writing. He regularly wrote articles for Berlin newspapers on the subject of Berlin and Mark Brandenburg . His first work was therefore also called Märkische Streifzüge . Soon Trinius undertook long journeys and hikes across Germany. He came back to Thuringia. He was so captivated by its landscape and history that he decided to move to Thuringia in the 1880s. He settled in Waltershausen in 1890 and lived there until the end of his life. This is where the text for the Rennsteig song was written (not to be confused with the Rennsteig song by Karl Müller ). During Trinius' stay in Waltershausen, his long-standing friendship with the local painter Friedrich Holbein began .

In the period that followed, more than 30 works were created about the Thuringian Forest , especially the Rennsteig and other natural beauties of Thuringia. In the period from 1886 to 1902, the Thuringian Wandering Man series was published in 8 volumes, which was primarily devoted to the Rennsteig and was intended to arouse the desire to travel to Thuringia among the educated bourgeoisie in the 1890s. Other titles by Trinius about his Thuringian adopted home were: "With lute and backpack", "Forays through the Thuringian countryside", "In the magic of the Wartburg", "Under the spell of home", "Happy hiking trips", "Through the Saale valley", "Through Unstruttal ”,“ Through the Werra valley ”. In addition, he also wrote about other German landscapes, such as the Vosges , the city of Hamburg , the area around the Rhine and Moselle .

The phrase “Thuringia - the green heart of Germany” also comes from Trinius.

August Trinius died in Waltershausen in 1919, where his grave can still be found in the cemetery. The grave monument dates from 1921 and was unveiled on the occasion of the establishment of the "Federation of Thuringian Mountain, Castle and Forest Communities". This association was re-established in 2001 with a ceremony at the grave of Trinius on the occasion of his 150th birthday.