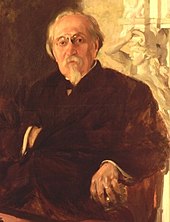 Manuel José Arriaga Brum de Silveira y Peyrolongue [ mɐnuˈɛɫ ʒuˈzɛ dɨ ɐʁiˈaɣɐ ] (born June 8, 1840 in Horta , † March 5, 1917 in Lisbon ) was a Portuguese politician. He was the first constitutional president of Portugal from 1911 to 1915 after the fall of the monarchy and the proclamation of the first republic .

In his youth, Manuel de Arriaga studied law at the University of Coimbra . There he came into contact with republican ideas. His enthusiasm for the Republicans led to a serious conflict with his father, who disinherited him for this reason. In 1890 he was briefly arrested for participating in Republican demonstrations. 1891 is elected to the board of directors of the Republican Party . In 1892 he was elected to the Portuguese Parliament, the Cortes , for the first time for the Republicans . After the revolution of 1910 he was first rector of Coimbra University and then attorney general. He is also elected a member of the constituent national assembly. After the government passed a new republican constitution in 1911, he won the first presidential elections under this constitution against his opponent Bernardino Machado . This was also set up by the Republican Party and represented the radical wing of the party (the supporters of Afonso Costa ), which was constituted a short time later as the Democratic Party . Arriaga succeeded Teófilo Braga , who initially acted as transitional president after the abdication of King Emanuel II .

Arriaga was an excellent speaker , and some of his speeches gave important impetus to the republican movement in Portugal. He valued a good relationship with the Catholic Church and was therefore in contrast to the militant anti-clericalism cultivated by other leading Republican politicians, especially Afonso Costa.

Arriaga's presidency was overshadowed by major domestic political problems. The Republican Party split into different parties, and the fragmentation of the party landscape meant that a government majority in parliament could no longer be achieved. The constitution did not give President Arriaga the power to dissolve parliament, so that parliament was forced to appoint new governments, all of which failed after a short time. The question of whether Portugal should join the First World War also divided the country. In addition, there were also monarchist uprisings, fueled above all by Captain de Paiva Couceiro .

The left-liberal Democrats emerged from the splits in the Republican Party as the most important successor party, whose leader, Afonso Costa, became the most powerful politician of the time. President Arriaga found himself increasingly embroiled in a power struggle against Costa. Costa forced Portugal to enter the First World War, and the government of Prime Minister Vítor Hugo de Azevedo Coutinho , supported by the Democrats, conducted negotiations with the Entente powers. In addition, under the influence of Costa, the Democrats pursued a decidedly anti-clerical policy that degenerated into regular church persecution. In addition, there were allegations that the Democrats had abused their position of power in the government to distort the results of the parliamentary elections of late 1914 (which were won by the Democrats).

In this situation, on January 25, 1915, a military coup by conservative army circles took place. The newly elected parliament was dissolved. Three days later, on January 28, Arriaga appointed the leader of the putschists, General Pimenta de Castro , as head of government. This was followed by the "Dictatorship of Swords" ( Ditadura das Espadas ), a conservative military government that ruled without parliament through decrees countersigned by the president.

The Pimento de Castro dictatorship was overthrown on May 14, 1915 by a republican uprising. President Arriaga was also discredited for having named Pimento de Castro head of government. After his fall, Arriaga was forced to resign (May 26th), Teófilo Braga was again for a short time interim president.

Manuel de Arriaga was married once and had six children. In 2005, his remains were transferred to the Lisbon Pantheon with a state ceremony.