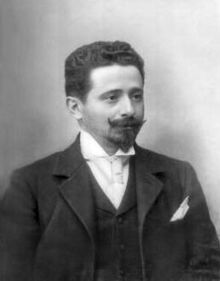 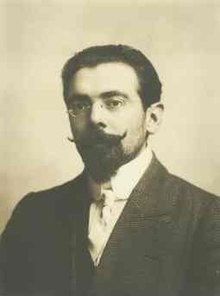 The Democratic Party ( Portuguese Partido Democrático (PD)) was a left-liberal and by far the most important political party in Portugal during the First Republic .

The party saw itself as the successor to the old Republican Party ( Partido Republicano Português (PRP) ). This was founded in 1876 and campaigned for the abolition of the monarchy and the introduction of a republican system of government in Portugal. After this goal was achieved, the old Republican Party began to split into several parties. In 1912 the Evolutionist Republican Party (PRE) ( liberal , center-right) and the Unionist Party ( conservative ) split off from the PRD. The remaining left-wing liberal wing of the PRD was called the Democratic Party from then on. However, the party has never officially carried this name, but continued to claim the name "Republican Party" as it was never officially dissolved. The Democratic Party also took over almost the entire party structure from the PRD. In order to be able to distinguish the “new” party, which after the break-offs of 1912 only represented part of the old PRD, from the PRD before this point in time, it has become common practice to call it the Democratic Party. In addition, the other parties that emerged from the PRD did not recognize the Democrats' claim to continue the old PRD. From these ranks, the supporters of the Democrats were often referred to as Afonistas after Afonso Costa , the leader of the Democratic Party.

History and position of the party in the state

The Democrats were by far the most important party in the First Republic, they were almost a state party. With the exception of António José de Almeida (PRE, President from 1919 to 1923), all constitutional presidents of the first republic belonged to the PD. Of the 45 governments of the first republic, 25 were led by the PD, or at least the PD played a major role in them.

The determining personality within the PD was Afonso Costa, who himself was head of government several times. During the First World War, the party entered into a grand coalition with the PRE, the so-called "government of sacred unity" ( governo da sagrada união ). In it the leader of the PRE António José de Almeida became head of government, Afonso Costa, however, held a crucial post as finance minister.

In 1917, Sidónio Pais removed the constitutional order. The PD stood in sharp opposition to the "New Republic" ( República Nova ) of Sidónio Pais, Afonso Costa went into exile in France . In 1918, Pais was assassinated and constitutional order was restored, while Costa was still in Paris, António Maria da Silva took over the leadership of the party.

The party's history ended with the military coup of 1926, as all political parties were banned and later replaced by the Unity Party of the Estado Novo , the UN .