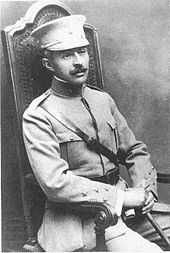 Sidónio Bernardino Cardoso da Silva Pais [ siˈðɔniw bɨɾnaɾˈðinu kɐɾˈðozu pajʃ ] (born May 1, 1872 in Caminha , † December 14, 1918 in Lisbon ) was a Portuguese military and coup leader , later president of his country. From December 5, 1917 until his death, as a military dictator, he was simultaneously head of state , head of government and foreign minister of Portugal .

Sidónio Pais was born the son of a writer. He lost both parents at an early age and entered the army at the age of 16, where he rose to the rank of captain. In 1911 he was a member of the constitution-giving assembly and minister of education in the first republican government under João Chagas , and later finance minister in the Augusto de Vasconcelos government .

From 1912 to 1916 Pais was the Portuguese envoy in Berlin , which he only left when the German Empire declared war on Portugal ( First World War ). Pais was pro-German and assumed that Germany would win the war. After his return he initially worked in the Portuguese Foreign Ministry.

In 1917, the republic was already severely weakened by the fragmentation of the party landscape and the resulting impossibility of finding governments with a parliamentary majority, Pais put on a coup against the elected government and forced President Bernardino Machado into exile. He suspended the constitution and tried to establish a "New Republic" ( República Nova) (not to be confused with the "New State", cf. Estado Novo ), an authoritarian state with a strong president. Pais was a charismatic and populist politician, his New Republic had strong features of a corporate state and thus anticipated the Salazar years , so to speak .

On April 28, 1918, he had a referendum carried out, through which he was elected president. This made him the country's first directly elected president. Under the old republican constitution, which was suspended by the pais, the presidents were not elected directly by the people, but by parliament.

Parliamentary elections were held at the same time. The party founded by Pais, the National Republican Party , won an overwhelming majority. The monarchists became the second most powerful force. However, the three republican parties ( Democrats , Evolutionalists and Unionists ) boycotted the election. Pais carefully tried to correct the anti-clerical policies of the previous governments, and diplomatic relations with the Holy See were restored. Even Pais could not enforce his politics against the resistance of the evolutionists and monarchists. General strikes and unrest broke out in several cities in October. In the north of the country, a monarchist military junta took power. Pais hurried to Braga to negotiate with the monarchists and thus prevent a civil war. When he returned to Lisbon, he was shot dead by a union official and former combatant on December 14, 1918 at Rossio train station .

Pais was once married and had six children, five with his wife and one illegitimate daughter.

The Museu Sidónio Pais is planned for his birthplace .