Logo of the magazine

News magazine is an Austrian weekly magazine. It was founded in 1992 by Wolfgang Fellner . The current editor is Horst Pirker .

This article or section needs to be revised: Very bumpy and on top of that tendentious chapter beginning ... - GUMPi ( discussion ) 17:26, 15 Aug. 2016 (CEST)
Please help to improve it and then remove this marking.

The success of the paper was based on the revelatory stories and exclusive reports enriched with graphics and display boards.

Encouraged by the good sales that the magazine found in Austria, the Fellner brothers founded various spin-offs such as the weekly magazine Format , the multimedia magazine e-media , the TV magazine TV-MEDIA and the women's magazine Woman .

Wolfgang Fellner and his brother Helmuth withdrew more and more from the editorial area in the 2000s and only hold minority shares in the newspaper group they founded. In 2001, the news group took over the traditional magazines profil and Trend, which were published by the same publisher . In June 2002, Rudolf Klausnitzer replaced founder Helmuth Fellner as chairman of the management board and general director of the publishing house. In August 2003 Wolfgang Fellner also withdrew from the operative business. At the beginning of 2006 Klausnitzer resigned from the management and switched to the advisory board. Oliver Voigt, previously Managing Director of G + J Poland , has been appointed as his successor . At the end of 2010 Voigt left the company and was replaced by Matthias Schönwandt in mid-February 2011. After only three and a half months in office, the company separated from Schönwaldt by mutual agreement at the end of May 2011. The background was "internal processes that are not agreed with the existing guidelines of the main shareholder of the News Group, Gruner + Jahr AG". Axel Bogocz was CEO until May 2014. The current COO is Ekkehard Veser.

In 2006, the Fellner brothers launched Austria, a new daily newspaper that uses journalistic methods similar to those of News . This sparked a violent conflict with the current majority owners of News.

In February 2011 it became known that the number of copies had been manipulated for years. Accordingly, compared to the ÖAK, an average of eleven percent of the sales circulation was embellished. The ÖAK then announced a special test for News.

The magazine, which appears on Fridays (until April 2017 on Saturdays), mainly deals with the topics of politics and people (gossip). The sub-headings include business, sport, culture, fashion, cars and, for some time now, science. As a supplement, there are often special issues on various topics.

During the 1990s, News was one of the leading reporting magazines, but since the turn of the millennium the political section has been increasingly restricted and trivialized in favor of tabloid journalism. After the news group took over the news magazine Profil , political background stories were largely relocated to the sister paper.

Since then, society topics and celebrity stories have increasingly been the focus of reporting. In addition to regular rankings (for example The 1,000 Most Important Austrians or The 100 Best Beers in Austria ) and large-scale opinion polls, News offers a weekly cover story from changing subject areas.

The investigative journalist Kurt Kuch brought for news among other details and background information for Causa Hypo Alpe Adria , the Telekom affair , BUWOG affair and Euro Fighter affair to light. In 2013, Kuch published information from the offshore leaks datasets in News about letterbox companies from Herbert Stepic , who soon after resigned from his position as CEO of Raiffeisen International .

The following parts of this section seem since March 2018 out of date to be : new ownership structure
Please help with to the missing information research and insert . 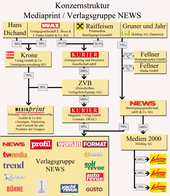 Ownership structure of the News publishing group, as of April 2008

The publishing group News GmbH was founded in 1992 together with the magazine News . From 1998 to summer 2016, the company was 56% owned by the Bertelsmann subsidiary Gruner + Jahr . Kurier- Verlag, which is majority-owned by the Raiffeisen Group, holds 25.3% of the shares, the founders Wolfgang Fellner and Helmuth Fellner 18.7% (as of 2010). In summer 2016, the majority of the publishing group passed from the German publisher Gruner + Jahr to the Austrian media manager Horst Pirker .

At the end of September 2011, the former ÖVP Vice Mayor of Vienna, Bernhard Görg, accused that the Austrian Chancellor Werner Faymann wanted to buy positive news coverage during his time as Viennese City Councilor by paying almost three times the rent of 2.7 million euros (prepaid twelve years) to News. As a councilor for residential construction, Faymann was responsible for the municipal company Wohnservice Wien , which rented the Media Tower in 2000.