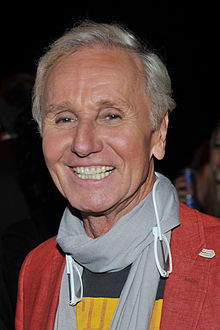 He became known as the frontman of the Austrian band Erste Allgemeine Verunsicherung (EAV) and by moderating the ORF dance show Dancing Stars , where he was also a participant and jury member.

Eberhartinger grew up in Braunau am Inn and graduated from high school in 1968 . He then stayed in the United States of America for a year before he began studying medicine in Graz , where he also met and fell in love with the sister of Thomas Spitzer , who would later become a bandmate with the EAV . During his student days he was active in the Communist Student Union . After a dispute with right-wing professors, Eberhartinger interrupted his studies, took various jobs in Munich and finally bought a Land Rover to travel to Africa. When he returned to Austria, he resumed his studies in Graz until he joined the EAV in 1981. In 1985 his son Christoph was born. Klaus Eberhartinger was good friends with his mother until her death in 2018, for example she took care of his financial affairs.

Since the mid-1990s, Eberhartinger has spent most of the year in Kenya, where Thomas Spitzer also bought a house.

In addition to various CD releases and EAV tours , he temporarily played the role of Gailtaler in the play Der Watzmann calls . This successful production was on tour for two years. In the third season of Dancing Stars in the spring of 2007, he and his dance partner Kelly Kainz took first place after he was about to drop out a few weeks before because he broke a rib while training. He then moderated the fourth season with Mirjam Weichselbraun , sat in the fifth on the jury and has been a presenter again since the sixth season. While Weichselbraun is the main moderator, Eberhartinger interviews the participants in the backstage area.

In 2007 he took over the moderation of the show Quiz Champion at the ATV broadcaster , Eberhartinger also moderated the Austrian version of the internationally successful show Eine gegen 100 on ORF 1 in 2008 and Dancing Stars for Europe on June 6, 2008 - the preliminary round for the Eurovision Dance Contest . He is also a guest on the ORF council show at irregular intervals . What's new? . On March 10, 2008, Ueberreuterverlag published his first book Sex, Lachs & Rock'n'Roll . In the summer of 2008 he was seen in the role of Sigismund in the operetta Im Weißen Rößl at the Seefestspiele in Mörbisch . In July 2009, Klaus Eberhartinger hosted the Great Hadern Show on ORF 1 , in which celebrities present their favorite hits - from hits to classical music. In 2014, he dubbed TV commercials for an electronics retail chain, lending his voice to a sloth.

In 2016, together with the band Schmidhammer, he recorded the official song of the ÖFB for the 2016 European Football Championship with the title This is us .

From February to September 2019 Eberhartinger went on a big farewell tour with the EAV, which included over 90 concerts in Germany, Austria and Switzerland. On September 14th the final followed in the Wiener Stadthalle. Before that, Eberhartinger had broken ribs three times in a fall at Burg Clam , which meant that some concerts had to be canceled.