ÖFB is a redirect to this article. Further meanings are listed under ÖFB (definition of terms ) .

At the beginning of 2018, 567,811 players in 2,217 clubs were registered in the association. This makes the association the third largest sports organization in the country, after the VAVÖ and the ÖAV . Football is the most popular sport in Austria before skiing , but only after mountain sports . Football is very important and has a tradition in Austria that can be traced back to 1894.

In November 1894, the First Vienna FC 1894 and the Vienna Cricket and Football Club , the oldest clubs in the country, played the first official football match in Austria. The first competition was held in 1897 with the Challenge Cup , in which clubs from Prague and Budapest also took part. In 1899, the English football pioneer Mark “M. D. “Nicholson organized the committee to organize football competitions , the forerunner of an association-like structure. 17 of the 45 clubs in Vienna at the time joined forces on January 4, 1900 to form the Austrian Football Union (ÖFU). First Vienna President Geo Fuchs became the first President of the ÖFU.

In the Habsburg dual monarchy Austria-Hungary , further associations were founded in those years:

The Tagblatt Cup , probably the first forerunner of today's championship, was held for the first time in Vienna in 1900 . In 1902 the first international match took place in Vienna against Hungary.

Disputes in the ÖFU led to the resignation of the Vienna and the Cricketer in 1904 and thus their dissolution. On March 18, 1904, under the leadership of the two clubs, the Austrian Football Association (ÖFV) was founded, which in 1906 dedicated itself to amateur status, with Heinrich Strehblow from the Vienna AC as its first president. In 1905 the association joined the world association FIFA, which was established in 1904, and in 1908 it hosted the fifth FIFA Congress, which took place in Vienna. Intensive efforts and negotiations between the interest groups led to the creation of five sub-associations in the ÖFV in 1911, which are divided into regions:

While the German-Alpine Football Association did not have regular matches, the Lower Austrian Football Association , to which the most powerful Viennese clubs belonged, organized a championship in 1911 for the first time based on today's scheme, which SK Rapid Wien won. This championship is now considered the first Austrian football championship. Three other sub-associations subsequently also held championships. The first Olympic participation took place in 1912 . After the ÖFV had held its meetings in the Ring-Café until then, it received its first own headquarters in the further course of the year at Annagasse 7 in downtown Vienna.

From 1923 the Viennese held the championship under the Vienna Football Association , which was founded in 1923 due to the separation of Vienna from Lower Austria , which in the following year introduced professionalism - a topic that had been discussed for years in Austria (and Europe) at that time Wiener thus assumed a pioneering role in Europe.

The professionalism also led to a sharpening of the contrast with workers' football, which was also expressed in internal upheavals in the ÖFV. In 1926 this led to a reorganization and re-establishment as the General Austrian Football Association (AÖFB) - officially qualified as apolitical, but practically bourgeois - by Hugo Meisl of Jewish origin - who had been the association's captain since 1913 and became general secretary - and the previous ÖFV president and now new Vice-President Ignaz Abeles - a doctor who became a member of Vienna after his time at the German Football Club in Prague and was the founding president of both the Lower Austrian and Vienna Associations and who had headed the latter until then - as well as the judge Richard Eberstaller , who was in the early 1930s became an illegal National Socialist and was to bring himself seriously into debt until 1945.

The 1930s describe the heyday of Austrian football. The national team thrilled the crowds as a miracle team under association captain Hugo Meisl , won the European championship forerunner, the European soccer team's cup held between 1931 and 1932, and scored on December 7, 1932 with a narrow 3: 4 defeat against England in the London stadium at Stamford Bridge a great success. With a rousing live report from London, which was also broadcast on Heldenplatz in Vienna , the former national player Willy Schmieger , who also appeared as a functionary, opened a new era in the country's sports journalism. At the 1934 World Cup , Austria finished fourth. The clubs gained international recognition through their success in the once highly respected Mitropa Cup .

Article in Fußball-Sonntag about the imminent dissolution of the ÖFB (June 5, 1938)

The aforementioned Schmieger was appointed in 1935 by the sports leader and vice-chancellor Ernst Rüdiger Starhemberg in the then corporate state as the “group leader” for football, but was replaced the following year by the now senior judge Richard Eberstaller. After Austria was annexed to the German Reich on March 12, 1938, it was the ÖFB President and now Chief Justice Eberstaller - who also attracted attention in those years through political death sentences, art theft and property sales - who de facto and on March 28th the ÖFB June 7 de jure dissolved (with which the ÖFB from the FIFA resigned) and thus also in football Gleichschaltung occurred. At the same time, professionalism also came to an end for the time being. Probably an absurdity, after all, it was Eberstaller who set up the association in 1926 as an alternative to amateurist workers' football.

After the war, the ÖFB was re-established. The first president was Josef Gerö , a former footballer, lawyer and politician who was not affiliated with any party and who was also minister of justice at times. Gerö had already been president of the Vienna Association from 1927 until his political and racist arrest by the new rulers in 1938. He kept the presidency, from June 1954 he was also vice-president of UEFA , which was co-founded by the ÖFB , until his death at the end of December 1954. During his tenure, Austria's last great success fell, third place at the 1954 World Cup .

In 2008, the ÖFB and the Swiss Football Association hosted the European Football Championship , the final of which was held on June 29th in Vienna's Ernst Happel Stadium . 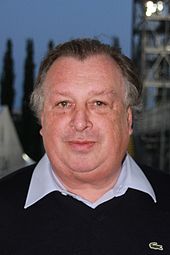 Since August 1, 2016, Thomas Hollerer as Secretary General / CEO and Bernhard Neuhold as Managing Director of Austrian Football Marketing GmbH and since January 1, 2017 of ÖFB Wirtschaftsbetriebe GmbH, have formed the association's operational dual leadership. From March 1, 2009 to July 31, 2016, Alfred “Gigi” Ludwig was General Director of the ÖFB.

On February 2, 2009, Leo Windtner was designated as the new ÖFB President. It was confirmed in the Extraordinary General Assembly on February 28, 2009.

The term of office of the Presidium is four years. The Presidium consists of the following members (as of October 2017):

President of the ÖFB

Sports directors of the ÖFB

Under team boss Koller, Austria was able to qualify for a European football championship for the first time in 2016
→ Main article : ÖFB team boss

Placement in the UEFA five-year ranking ( previous year's ranking in brackets ). The abbreviations CL and EL after the country coefficients indicate the number of representatives in the 2019/20 season of the Champions League and the Europa League .