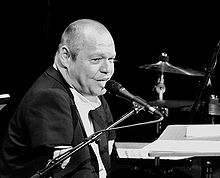 Thomas Quasthoff (born November 9, 1959 in Hildesheim ) is a German opera singer ( bass baritone ) and professor of singing at the "Hanns Eisler" University of Music in Berlin .

Thomas Quasthoff was a thalidomide born damage and is therefore only 1.34 m tall. In the documentary The Dreamer (2004/05) Quasthoff describes how he had to spend his childhood under harassed circumstances in a camp-like residential pen for the severely disabled. With the help of his parents and his brother Michael , who was two years older than him , he escaped this isolation, they did not exclude him from any activity and let him take part in everyday life in a natural way. The father recognized his son's musical talent early on and, despite much resistance, persistently tried to make singing lessons possible for him. The music academy in Hanover rejected him because he could not play a second instrument due to his disability. In 1972, when he was 13 years old, he sang at the instigation of his father Sebastian Peschko , who was then head of the “Chamber Music and Song” department of the NDR Landesfunkhaus Niedersachsen in Hannover. Quasthoff had been given five minutes to do this - it turned into an hour and a half. This paved the way for vocal training, and in the same year he began studying singing with Charlotte Lehmann in Hanover . He learned music theory and music history from her husband Ernst Huber-Contwig .

After graduation Quasthoff studied six semesters Jura , then broke off his studies and spent six years in marketing at Kreissparkasse Hildesheim operates. During this period he appeared both as a jazz singer and with his cabaret program Lichte Momente , in which he shone with imitations of voices by politicians such as Willy Brandt , Helmut Kohl and Franz Josef Strauss . In 1980 he supported the Hanoverian musician and composer Michael Rietzke with his band "The Locals" and sang two pieces on his debut album. Quasthoff recorded his first LP with the title Vocal Spirit in 1986 for Edition Collage, on which jazz and gospel sounds dominate. From 1980 he worked as a radio presenter and speaker at the NDR Landesfunkhaus Hannover.

In 1988 Quasthoff achieved his international breakthrough when he won the baritone vocal at the ARD International Music Competition . In 1994 he quit his position at NDR and started his own business as a freelance artist; he also gave singing lessons. In 1995 he performed the complete St. Matthew Passion by Johann Sebastian Bach in Israel together with the Windsbacher Boys Choir for the first time since World War II . In the following year he received a professorship for singing at the Hochschule für Musik Detmold , which he held until 2004, after which he moved to the Hochschule für Musik "Hanns Eisler" Berlin . Lars Woldt is his student .

In 1998 Thomas Quasthoff made his debut at Carnegie Hall in New York / USA with Mahler's Des Knaben Wunderhorn . Since then he has performed in almost every major concert hall in the world. Initially he specialized in concert performances and art songs ; His interpretation of the song cycle Winterreise by Franz Schubert with the pianist Charles Spencer as an accompanist is considered outstanding . A recording of it was released in 1998. It followed in 2005 The beautiful miller's wife with Justus Zeyen as a companion. In the meantime Quasthoff was increasingly involved in opera performances . In 2003 he made his debut as Fernando in Fidelio by Ludwig van Beethoven during the Salzburg Easter Festival . He caused a sensation here, among other things, with the role of Amfortas in Parsifal by Richard Wagner in the Vienna State Opera .

In 2004 Quasthoff wrote his autobiography The Voice , and in 2006 he presented another autobiographical work, The Baritone , as a literary addition to the CD Beethoven, My Soul . In 2006 he recorded his first jazz album with Till Brönner , Alan Broadbent , Peter Erskine , Dieter Ilg and Chuck Loeb , which was released in 2007 ( The Jazzalbum - Watch what happens ). In October 2006 he announced his complete withdrawal from the opera stage in order to devote more time to his concerts and teaching. Since 2010 he has also been an ambassador for the Christoffel Mission for the Blind . In 2010 he also released his album Tell It Like It Is , on which he moves between the areas of soul , rhythm and blues and pop . His companions are u. a. Bruno Müller, Frank Chastenier , Dieter Ilg and Wolfgang Haffner . In October 2011 he announced that after a laryngitis, on the advice of his doctors, he would finally resign from the jazz stage and "no longer give concerts in this genre". On January 11, 2012 it was announced that he was finally retiring from the stage as a singer for health reasons.

From November 2012 Quasthoff was in Shakespeare's Was ihr wollt als Feste, Olivias Narr, on the stage of the Berliner Ensemble . In September 2013, the premiere of the cabaret program Keine Kunst by and with Quasthoff and Michael Frowin took place in the Haus der Berliner Wühlmäuse .

Quasthoff lives in Berlin and has been married to Claudia Quasthoff, who works as a television journalist for MDR , since 2006 .

Quasthoff since 2003 patron of the Foundation Children of Chernobyl in the country Lower Saxony .

“I would be a bad teacher if I could create an oasis of happiness for my students and they didn't have a clue of what to expect after college. From that point of view, I'm strict. "

“Many think that a disabled person has to suffer, be sad and desperate. But I am not at all. I have the desperation behind me, I am very life-affirming. And I try to make it easy for people to deal with me. "

"A soloist only has a chance if he is really good."

“There are 80 million disabled people in Germany. I have the advantage that you can tell. "

“I know students who can do it better. Its charisma is also expandable. You can really see the effort in him. The art of singing great is that you just don't see the effort. Potts is, so to speak, the opposite of what I convey to my students. [...] I grant Potts the success from the bottom of my heart. [...] But now, please, nobody should pretend that a new classic star has been born. "