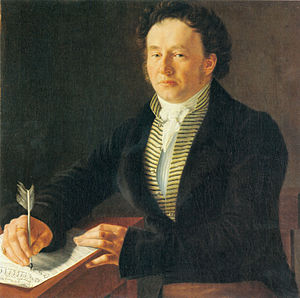 Louis Spohr (born April 5, 1784 in Braunschweig , †  October 22, 1859 in Cassel ), also Ludwig Spohr (baptized name Ludewig ), was a German composer , conductor , singing teacher , organizer of music festivals and a violinist of international repute; Along with the Italian Niccolò Paganini, he is one of the greatest violinists of his time. Spohr was already a celebrity during his lifetime and was considered the most important from the death of Carl Maria von Weber (1826) and Ludwig van Beethoven (1827) until the breakthrough of the works of Franz Schubert , Felix Mendelssohn Bartholdy and Robert Schumann from the mid-1840s living German composer. 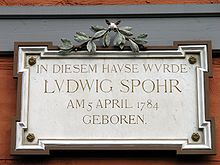 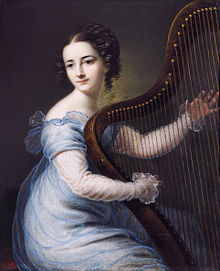 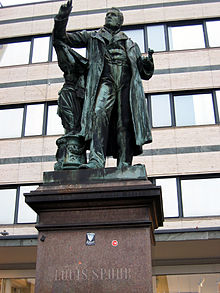 Spohr's monument in Kassel, inaugurated in 1883 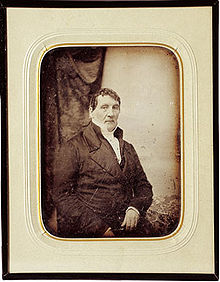 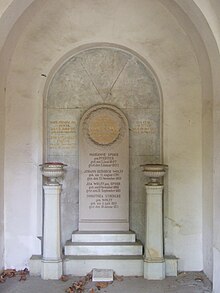 Spohr was born as the eldest child of Medical Councilor Karl Heinrich Spohr (1756–1843), who was transferred to Seesen am Harz as a physician in 1786 , and his wife Ernestine Henke (1763–1840). The child showed his musical talent early on, so that as early as the age of five he could occasionally sing duets with his mother in the family's musical evening entertainment. At the age of twelve, Spohr was sent to Braunschweig to be trained in music at the Katharineum while attending high school . Here Gottfried Kunisch and later Charles Louis Maucourt became his violin teachers; the organist Carl August Hartung briefly taught him composition. According to Spohr's own assurance, this was the only instruction he was given in harmony and counterpoint , so that the abilities that he possessed in this area were mainly due to his own diligence and talent.

At the age of 15, Duke Karl Wilhelm Ferdinand of Braunschweig appointed him chamber musician and promised to hand him over to a great master for further training. Spohr wanted Viotti , but he was no longer teaching. The choice fell on the violinist Franz Eck (1774–1804), who was about to embark on an art trip to Russia. Spohr accompanied him and did not return to Braunschweig until July 1803. Here he met Pierre Rode (1774-1830) (a master student of Viotti), whose game exerted a lasting influence on his further development. Spohr's reputation as a violin virtuoso now spread rapidly. In December 1804 he made his debut with two spectacular concerts in the Leipzig Gewandhaus . In 1805 he received the position of concert master in Gotha . He remained in this position until 1813 - interrupted by several art trips that he undertook with his wife. In 1806 he married the harp and piano virtuoso Dorette Scheidler (1787–1834), with whom he had three daughters; one of his grandsons was the writer Louis Wolff . On January 26, 1807 he was accepted into the Freemason Lodge Ernst zum Compaß in Gotha .

In 1813 he followed a call as concert master of the Theater an der Wien . There he met Beethoven several times , who also visited him and his family at home. Spohr described the memorable encounters in his autobiography. Due to disputes with the director of the theater, Count Ferdinand von Pálffy , he resigned from this office after two years and went on art trips again. They took him through Switzerland, Italy and the Netherlands and to his first personal meeting with Niccolò Paganini . In the winter of 1817 he took over the position of Kapellmeister at the theater in Frankfurt am Main and the management of the orchestra of the Frankfurt Museum Society . Here he performed his operas Faust in 1818 and Zemire and Azor in 1819 , both of which met with enthusiastic applause. Nonetheless, Spohr left Frankfurt in September of that year and went on art trips to Belgium and Paris again. In 1820 he traveled to London - on the mediation of Ferdinand Ries .

After a four-month stay, he returned crowned with fame and settled in Dresden. The following year, at the instigation of Carl Maria von Weber, he was appointed court conductor to Kassel and took up his new position in January 1822. As a conductor, Spohr contributed to the development of modern orchestral culture. His new conducting technique “with a roll of paper, without any noise” caused a sensation at the Musikfest in 1810, as did his conducting with a baton ten years later in London . From then on he no longer undertook major virtuoso journeys. He made a contribution to the musical life of the city of Kassel, bringing the level of the orchestra to an unprecedented level and founding a choir for oratorio music.

His work as a teacher and composer was significant. As a teacher he became the head of a violin school which Germany had not had since Franz Benda , and students flocked to him from all parts of Europe. At the same time he developed an astonishing productive power in all areas of composition and was active as a conductor at numerous music festivals in Germany and England. The loss of his wife (1834), for whom he found no equal replacement in a second marriage (since 1836) with the pianist Marianne Pfeiffer (1807-1892), could not diminish his zeal for work and his loyalty to his duties, any more than she did petty harassment that he later had to endure from his prince, especially after the revolutionary year of 1848 , although he had been named general music director the year before. In 1835 he joined the Kunstverein für Kurhessen . Spohr was also an honorary president of the "German National Association for Music and Science" founded by Gustav Schilling in Stuttgart in 1839. Retired in 1857 against his wishes and with partial deprivation of his salary, until his death on October 22nd, 1859, he remained a person and artist of general admiration.

As a composer, Spohr has enriched musical literature in each of its areas with important works. In the field of dramatic music he became the main representative of romantic opera alongside Carl Maria von Weber and Heinrich Marschner , even though he lagged behind these two in terms of scenic effectiveness and his operas, with the exception of Jessonda , disappeared from the German stages during his lifetime . In his oratorios The Last Things , The Fall of Babylon and others, too, he followed exclusively his nature, although here his inclination for the elegiac, his consistent adherence to a sublime pathos and the richness of modulation which is characteristic of all his works and which often degenerates into overabundance Impact effect less than in his operas. The works especially written for his instrument and his 15 violin concertos, including the 7th, 8th ("in the form of a singing scene") and 9th, as well as his violin duets, had the greatest success. His violin school is a classic in violin lessons and is still available in print.

In 1990, the classic label cpo , which specializes in first recordings, began recording works by Spohr. This has helped to make his music better known again. The NDR Radiophilharmonie Hannover recorded all symphonies under Howard Griffiths from 2006 to 2012. The violinist Ulf Hoelscher recorded the violin concertos, and his Faust opera was also released on this label. In 1998 cpo released a CD with eight Spohr overtures.

Spohr is an honorary citizen of the city of Kassel . Since August 29, 2009, the Spohr Museum has been located in the south wing of the Kulturbahnhof Kassel . His statue, created by Ferdinand Hartzer in 1882, stands on Opernplatz . There is a Spohrstrasse in Kassel. It runs where Louis Spohr's garden house “Before the Cölnischer Tor” was. An “International Louis Spohr Competition” has been held in Kassel since 1994. The City of Kassel Music Academy has been nicknamed "Louis Spohr" since 2012.

In addition to an annual youth promotion award, the city of Braunschweig awards a music award named after him every three years "to renowned composers who point the way for contemporary music". The city of Seesen also awards a Louis Spohr Prize, called the "Louis Spohr Medal of the City of Seesen am Harz". In Freiburg im Breisgau , Wolfgang Marschner initiated an international violin competition "Ludwig Spohr" in 1976 (from 2010 onwards as an indirect successor to the "International Violin Competition Freiburg"). An international LOUIS SPOHR competition for young violinists in three categories (up to 14/17/21 years) takes place every three years at the Liszt School of Music Weimar . In 1906 Spohrstrasse in Vienna - Hietzing was named after him.

In Gotha , where Spohr lived from 1802 to 1813, Spohrstrasse still commemorates the composer today. His former residential building at Mühlgrabenweg 15, known as the “Spohrhaus”, still exists, but has been vacant for several years and is in great need of renovation. The simple commemorative plaque with the text "Here lived Louis Spohr" that was once attached to the street has disappeared. The district music school in Gotha, founded in 1986, has been called the district music school "Louis Spohr" since 1989, and the large practice room in the Reinhardsbrunner Strasse 23 building is named in honor of the composer Spohr-Saal . In March 2013, the European Louis Spohr Cultural Association was founded in Gotha under the leadership of violinist and concert master Alexej Barchevitch .

A plaque was placed on the former house of the von Sybel family at Heinrich-Heine-Allee No. 7 in Düsseldorf for his 200th birthday. Spohr lived here in 1826 for his first performance of the oratorio “The Last Things” at the Lower Rhine Music Festival and in 1835 for a meeting with Felix Mendelssohn Bartholdy, Karl Immermann and Christian Grabbe .

The asteroid (7625) Louisspohr was named after him.

The old opera house in Kassel , where Spohr conducted for 35 years

Louis Spohr left about 280 works (the year of creation is given in brackets).

In addition, Spohr composed numerous secular and sacred works for choir and orchestra, choir and piano or a cappella choir, as well as some arias with orchestral accompaniment.

Spohr published some overtures to stage works separately for use in the concert hall, mostly with their own opus number:

Spohr did not have three of his 18 violin concertos printed because they did not meet his requirements. The classical label cpo , which specializes in first recordings, published the concerts WoO 9 and WoO 10 as well as the concert set WoO 16 in 2000.

Further concerts and concertanti for several instruments and orchestra